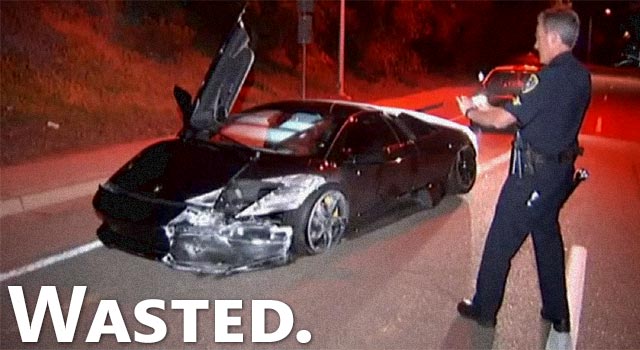 Sure, you have probably bought at least one or two new Lamborghinis in your lifetime, but you're not a real "baller" until you buy one, crash it within hours, and then leave it on the side of the road. Step up your game, rookie.

That's what happened in La Jolla, California this week when a driver whose disposable income was greater than their ability to drive or make sound decisions abandoned their new $220,000 Murcielago on the side of the road after a crash. According to witnesses, the 2008 Murcielago was speeding, struck a median, and then a man and woman ran from the car. Police were able to find paperwork in the car from the purchase earlier that day and have been staking out the reported owner's house since then.

The Murcielago is a beast, with a 631-hp V-12 engine that makes it a difficult car to drive. Apparently it was too much to handle for the modern day (not quite) Bonnie and Clyde, who could be facing a misdemeanor hit-and-run charge. And of course, they have already received their felony charge from the Lamborghini school of driving, and possibly a life sentence of stupidity.

Check out some video of the wreck below.

Try not to weep.