Taco Bell Will Use Dorito's For Shells. Awesome.

Last fall, there were rumors that Taco Bell was testing tacos with actual Nacho Cheese Dorito's shells. Yeah, awesome right? Now you get to have the taste of Dorito's, Taco Bell, and orange fingers all in one. That's a man meal right there. What happened to the payoff though? Where are our Dorito shells? They have been in some regional places, but not nationwide.

Well, cheap eaters...pretty soon you'll be able to have your own: the new shells are going national. Suck it California, Ohio, and North Carolina! Just kidding, we're upset that you had them before us. According to reports "Doritos Locos Taco" shells will be released nationwide on March 8th. Thank you Frito-Lay!

It really is perfect though. Oh, and did you catch that I said new "shells" up there? Yeah, apparently there might be a Cool Ranch flavor too. That's not confirmed though, they have only been tested in local markets as well.

Enjoy one last picture while you wait for March. 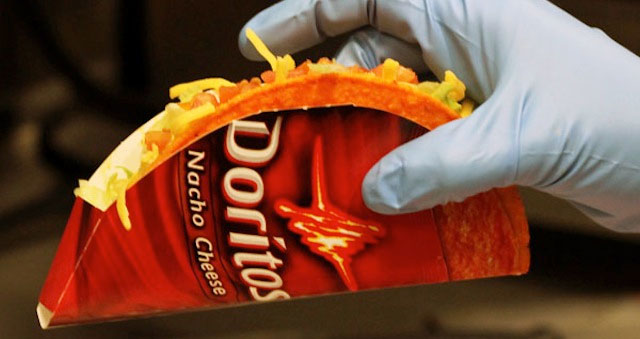