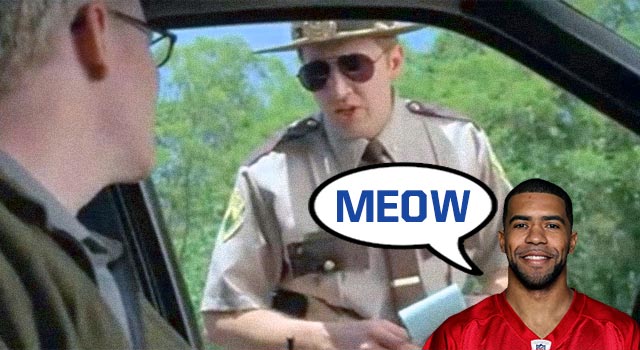 If you haven't seen Super Troopers you should probably jump on Netflix and watch it now, and if you don't have Netflix the DVD is $7 on Amazon so you have no excuse to miss this cinematic classic that was unfortunately snubbed at the 2002 Academy Awards.

If you have seen it, you'll be familiar with the scene in which a couple of the troopers approach a vehicle, and try to say the word "meow" as much as possible.

Atlanta Falcons safety Thomas DeCoud is apparently a fan as well, as he started doing the routine while on a phone interview with Bram Weinstein of ESPN. It starts out subtle enough, and then jumps into full blown meow-mode at the 2:46 mark.

Weinstein is apparently a fan as well, and tweeted this to DeCoud after the interview: