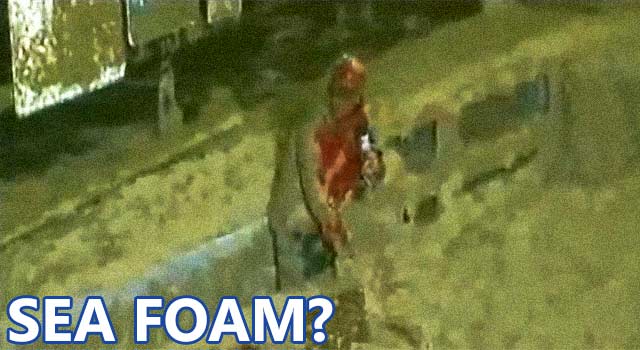 How much do you trust weathermen? Probably not much since it's the one of the few professions in which being right at least half the time translates into job security. Well, poor Tucker Barnes from Fox 5 in DC got a taste (literally) of his own medicine a last year during Hurricane Irene. According to his stations biography he:

Joined the Fox 5 Storm Force in November 2003 and works as a weather producer and on-air meteorologist. His passion for the weather began at an early age when his interest in hurricanes and big East Coast Nor'easters storm led him to follow national severe weather patterns. And he also loves this area of the country and the challenges it presents in forecasting.

Get ready to have your passion for the weather and the challenges you face tested, Tucker. In the video below you'll see Tucker talk about the "sea-foam" that is hitting him in the face during the live broadcast. Why did he think it was sea-foam? Because the "Chief Meteorologist" back at the station said it was. Unfortunately, it wasn't "organic plankton" like he thought...but raw sewage that was backed up and floating in the water.

If you've got a strong stomach, check out the video to see Tucker Barnes get covered. I feel bad for the guy, but with a name like Tucker Barnes...well, he kind of deserves this.