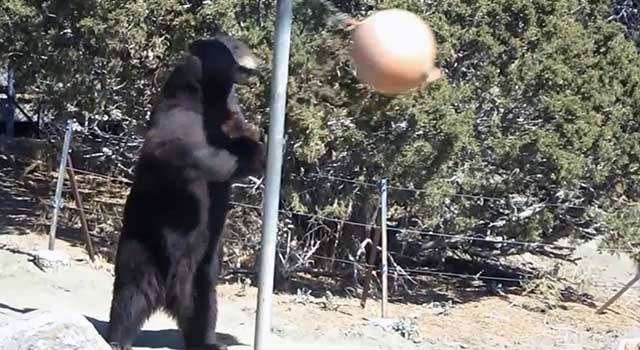 We really don't need to write anything, since this video of a bear playing tetherball is already the greatest thing on the internet, but we should probably give you some background.

A bear named LG, is a rescue animal at Animal Ark, Inc. in Reno, Nevada. A visitor was at the park and decided to shoot a quick video when he saw LG playing the old schoolyard game, and the video went viral almost instantly.

The video is fun, and LG seems to be enjoying the game, but the story of how LG got to the park is pretty amazing too. Animal rescuers found him when he was only 2-years-old, in below-freezing temperatures, and weighed just 14 pounds. Most bears that age weigh at least 60 and up to 100 pounds during the winter. The animal sanctuary took him in and nursed him back to health.

Despite the recovery, LG lost the tops of his ears from frostbite, but he's now in great shape and playing one of the greatest schoolyard games ever better than most elementary school kids.

Check out the bear with more athletic prowess than Brandon Weeden below.