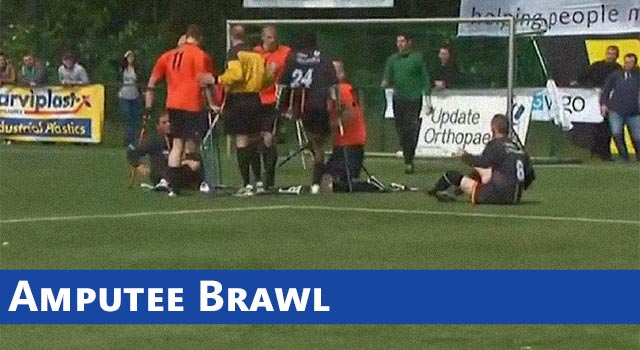 Recently, there was a soccer match that pitted Belgium against the Netherlands, and it was a great idea in concept. Both teams were comprised of players who had gone through an amputation, and the two teams of one legged players would be able to battle in an inspirational match while raising funds for charity.

Great in theory, but in practice it turned out to be something completely different.

At the beginning of the game, the players used crutches or synthetic legs and were putting on an admirable match. Then a brawl broke out.

That's right, the fight involved many of the players and also several spectators that took to the field and joined the brawl to end them all. Altogether, around 20 people were part of the scrum.

Referees tried to break up a small fight after one player tripped another, but they weren't able to stop the larger brawl from breaking out.

Check out some footage of the incident below.