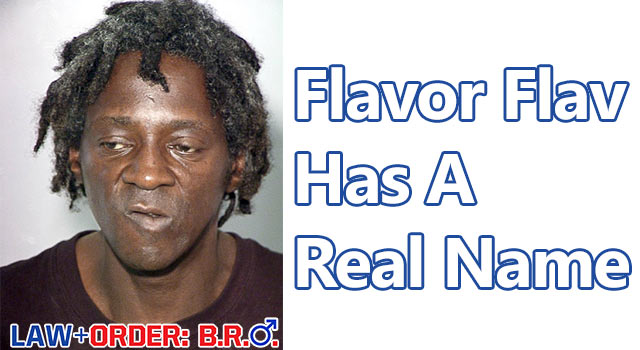 Flavor Flav was arrested last week in Las Vegas on assault charges. He's accused of assault with a deadly weapon and battery by his fiancee of eight years, Elizabeth Trujillo. The altercation began when Trujillo confronted Flav about him cheating on her, and Trujillo's 17-year-old son got involved to protect his mother. Flavor has a hearing coming up, and is being held on $50,000 bond, although it was unclear if he actually has a lawyer.

The only entertaining part of Flavor Flav's case is that we all finally got to learn his real name; which is almost entertaining in that it's not entertaining at all: William J. Drayton. Seriously? I had to double-check that William J. Drayton wasn't a 19th century robber-baron oil magnate instead of an "aging rap star." On top of that, although police reports claim he's 53, it's clear from his public mug shot that he's about 72. Apparently his career of third-rate reality shows and wearing gigantic clocks hasn't paid off for ol' Flavs.