Man Tries To Rob Someone, Gets Beat Up By An MMA Fighter 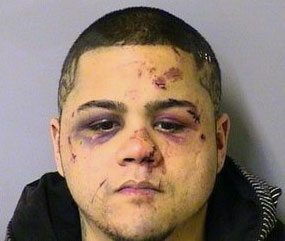 So this weekend, a misguided man tried to rob a guy at gunpoint. Problem was, the other guy was a mixed martial-arts expert. Even though Guy #1, Anthony Miranda - AKA the dumbest gangster ever, had a gun he wound up on the losing side of this match.

The 24 year old guy you see on the left with the awesome designs shaved into his head is facing a charge of discharging a weapon in the attack. The discharge? Yeah, it hit him in his own ankle. Another point for him in his attempt at becoming the 2011 World's Dumbest Criminal. The MMA Fighter was sitting in his car when the genius came up to him and asked him for a lighter. The MMA fighter said he didn't have one, dummy pulled out his gun and took the man's valuables, and then ordered the MMA fighter out of the car.

That's when things got good. MMA grabbed Miranda's gun and during the fight shot himself in the ankle. MMA held the robber down until the police came, when he then handed a bloodied and bruised Miranda to the police and told them that he participates in Ultimate Fighting Championships.

Miranda was treated at a hospital and then released to the cops.

Good job Anthony Miranda, your sad eyes really express to people that crime doesn't pay. You should receive an award for crime prevention...nobody wants to turn out like you.