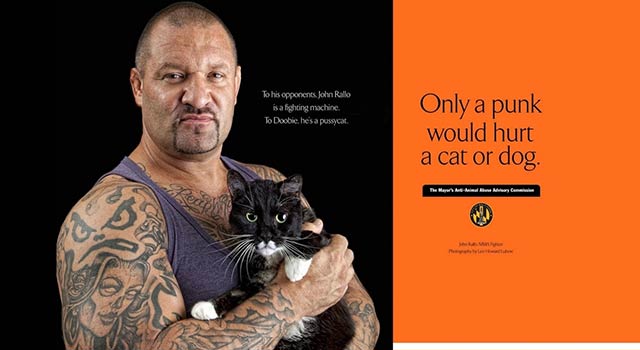 My own Baxter-look alike, Carraway, was originally a stray who was rescued from St. Louis city pound, and then found his way to me via an amazing group called the St. Louis Senior Dog Project. So, when I saw an article about Baltimore's new anti-animal abuse campaign, my heart immediately melted and I gave Carraway a good long hug until he got distracted by ham treats or a squirrel outside.

Featuring professional athletes, musicians, actors and other notorious "tough guys," their Show Your Soft Side campaign shows tough guys getting soft and cuddly with the pets they love. Kudos to the city of Baltimore and mayor Stephanie Rawlings-Blake. If you live outside of Baltimore, you may not like the Ravens, but we here at Bro Council will always have love for the dogs and cats. Check out some more animal lovers at the source link below, they range from baseball players, to comedians, to Tommy Lee.