Great NBA Debate: Jordan vs. Everyone 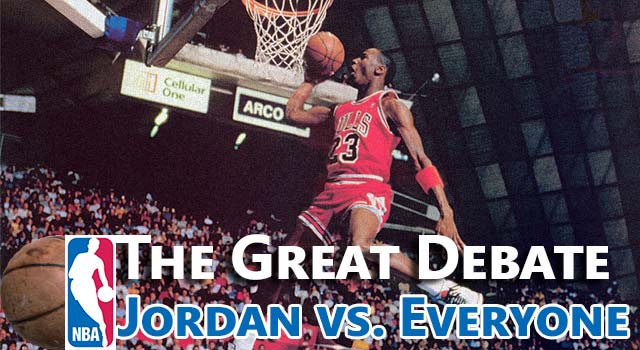 This will be a recurring NBA conversation covering current events, history, and views, all from Matt Truck (@BroTruck) and Dan Quarterly (@DanQuarterly).

Here are 5 things to know about the authors:

Matt Truck: My first clear memories of NBA basketball were spent with WGN on weeknights in my basement during my formative years. I definitely think I became an NBA fan because of Michael Jordan, like many people in my age range. Business-wise, Space Jam was probably a bigger deal for his fan base development than anyone realized, but that's another topic for another day.

For the purposes of full disclosure, I do own the Michael Jordan to the Max (IMAX) documentary, I once wrote him a letter asking for his training regimen, and I owned the vertical leap training book authored by his trainer. Nonetheless, I was in fifth grade when the 72-10 season happened, and this was around the time that I started playing myself.

Dan Quarterly: While you were writing Michael Jordan letters, I was cheering for Reggie Miller, Gary Payton, and Karl Malone so hard to beat him that I would go to bed hoarse. My first memories of basketball were right around Jordan's hiatus. I bought a Hakeem Olajuwon poster at a school book fair (not even knowing who The Dream was) and, as a result, I felt that it would only be fair if I followed NBA action as much as my 7-year old mind could. And I haven't looked back since.

MT: I think that MJ had a huge influence, for better or for worse, on changing the way that we judge athletes' success now. My memory may be less than stellar from my formative years, but back in the early 1990s, were people really saying "Boy, that MJ's great, but look at how many titles Bill Russell had!" I always kind of viewed this as an incomplete argument.

DQ: My view of MJ has changed significantly since he was active in the league. When he was playing, I despised him. I always pull for the underdog. Always have, always will. After all, I'm a Cleveland fan. But now, looking back at the "Legend" of Michael Jordan, I love him. I don't disagree that he changed the way we view athletes and rate their successes and how they'll be remembered, but I do disagree that he did so "for better or for worse."

He set the standard by working harder than anybody else in the association, being known as the fiercest competitor to ever lace up, turning around a franchise with a history of failures, outplaying every Hall of Famer that he ever lined up against (literally beating 11 of the top 50 players ever in the playoffs and averaging at least 30 points per game in each of those series [Bird, McHale, Parish, Worthy, Johnson, Thomas, Barkley, Malone, Stockton, Drexler, Ewing]), never losing a finals - even when he was 36 years old with little lift left, and putting up video game-like numbers and hitting shots that one can only dream about in the process.

What impresses me the most above everything else about MJ is that NOBODY associated with the NBA then or ever questions if he is the best. Players before him, players he played against, and players since all know that #23 is the best ever.

So I don't think he set the bar for better or worse, I just think that he set the standard. And the way he did it will never and can never be duplicated. I base everything on the Jordan Meter.

MT: The Jordan Meter is almost an unfair standard to have to be compared against, but maybe that's also because the ramifications of the changes he helped bring to the league are still being felt and digested, and the league is full of players that his game influenced. I think the view that we'll see someone better than Jordan isn't merely a basketball-related question. Fundamentally it comes down to someone changing how basketball is played. That seems to take a lot more time than 15 years for seismic shifts.

Take today for instance. Even LeBron hasn't changed the way the game is played yet. Guys his size like Magic had the court vision and affinity for sharing the ball. I think it's easy to confuse modern body science and the development of training methodologies for fundamentally changing the game. Has the league ever seen a force like LeBron? Well, yeah. Take Wilt or Shaq, guys who were ridiculous physical assets without anyone who could really check them (Bill Russell perhaps in Wilt's case). We've just never probably seen a wing player do it like this. Has that changed basketball? No, probably not.

DQ: I don't think it is just that Michael Jordan changed the game as much as it is that he conquered it. Everything that professional athletes dream of doing, MJ did. He was the face of the league, he scored all the points, he broke all the records, and he won all the titles. Again, what is most important about that is who he beat on his way.

But when I reference the Jordan Meter, it is all-encompassing. It includes team and individual success, respect of your peers, longevity, and how you do it all.

I know that ESPN (which, by the way, I hate with a passion and try my hardest to never watch) is trying to brainwash its viewers during the Heat win streak and even tried during Jordan's birthday week to compare MJ and LeBron, but can we first start by comparing LeBron and Kobe?

Again, we've tried to do that, but the answer has falsely lied in who was better at the present time. What happened to body of work - successes and failures? When every active player has retired, the three that will find a spot in the top 10 of all-time NBA players are Kobe, LeBron, and Tim Duncan. We can throw out TD's comparisons because his game is way different than the other two. But who will rank higher between Kobe and LeBron?

MT: I think that the debate is challenging. Athletically, LeBron is more imposing and more naturally gifted. Basketball-wise, they're not clones so a direct comparison is really difficult. Kobe is a 2-guard in the Jordan mold. LeBron is a 1-4 depending on who's out on the court. When it's all said and done, I think it's LeBron. It's closer in recent years than it probably will end up in the future more due to the fact that LeBron was outclassed on shooting ability for most of his career. The differences are really more narrow than most people realize -- Kobe is a better shooter from 3 by about 1 percentage point but the margin is a lot greater on the foul stripe.

In terms of the Jordan Meter title element, one thing I think is easily forgotten is this: Kobe never has won a title without a dominant low post presence. Now, that being said, Jordan and LeBron both got rings with stellar wing player complements, so it's not a totally fair ding against Kobe, but this point is key to me in informing the debate a little bit better.

DQ: I just want to point out how shortsighted we are as spectators. Right now, the world knows LeBron as the most athletic, explosive, invincible athlete since Achilles. But how are we so easily forgetting not only Kobe's resume to-date, but also his highlights? LeBron's dunks are powerful, I'll give you that, but out this video of Kobe dunking, dunking, and dunking again.

And remember, Kobe isn't the genetic freak that LeBron is. He is just another NBA player if you take away everything but his competitiveness. But if you don't have 15 minutes, just fast forward to the 4:38 mark. Maybe that'll remind you that Kobe isn't just a shooter.

Round one of the debate is over.