Minor Leaguer Vinnie Catricala Strikes Out On One Pitch 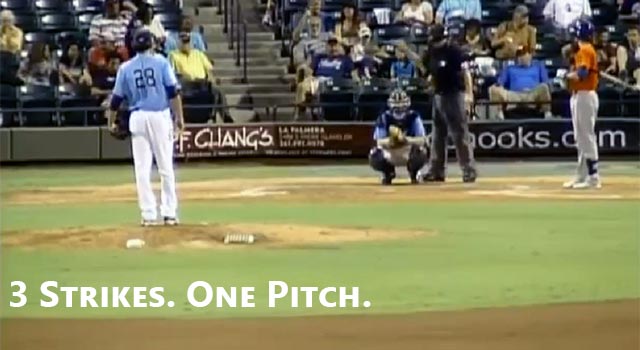 Vinnie Catricala is a third baseman for the Midland Rock Hounds, which is the Double-A team of the Oakland Athletics. Recently, the Rock Hounds were playing the Corpus Christi Hooks (Houston Astros) when Catricala decided to make history by striking out on one pitch against pitcher Nick Tropeano.

Yes, you read that right.

Catricala was called out when he decided to argue with home plate umpire Ron Teague about the first strike call. Instead of arguing after the at-bat he stepped out of the batter's box immediately to speak his mind. That's when Teague decided he was breaking Rule 6.02 (c):

Since Catricala didn't step back into the batter's box after the second called strike, the ump called another one using the same rule and Catricala was out. History made!

In Catricala's defense, the first pitch was clearly a ball, so technically he was the first person to ever be called out with 0 strikes as well. Well played, Catricala.