TWIBQ: So Many To Choose From!

Remember at the beginning of the season, after Week One, people were calling Rex Grossman the real deal? Yeah, that's why you should never base your MVP votes on the first three weeks of the season. He's now getting benched for John Beck after throwing approximately 12 interceptions in last week's game (actual number of interceptions may vary). He went from being eligible for YouTube tribute videos set to Justin Timberlake music, to Steve Young calling him a little kid, to being benched for Beck and given a different kind of YouTube video.

I'm not saying Rex Grossman won't be a starting quarterback in the NFL next year, I'm just saying that he shouldn't be. 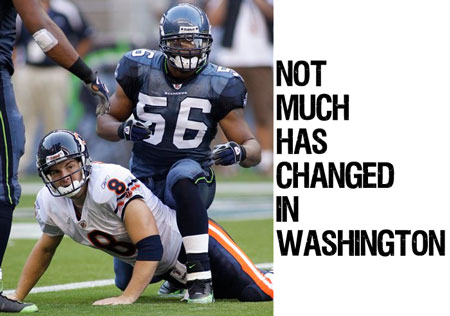 Sometimes you should just stay down, Rex.

In announcing his decision, Mike Shanahan said “You can’t constantly turn the football over, and if you do, you’re going to lose your opportunity to lead the football team.” What he didn't say, but should have, was "I have made an amazing amount of bad decisions at Quarterback and I wish John Elway would come out of retirement and make me look good again."