Jenny's Beard Of The Month - Matt Bischoff From Survivor 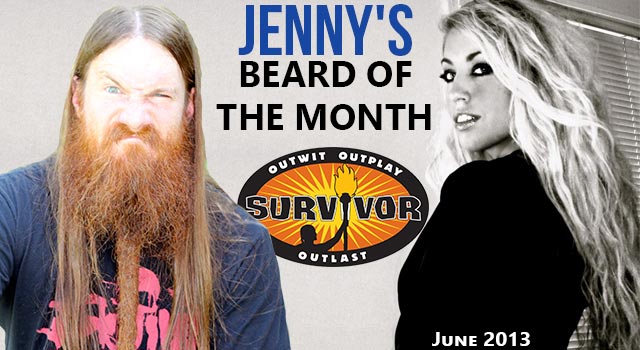 Beard Of The Month - June 2013 - Matt Bischoff of Survivor

Summer has arrived and so has our Beard of the Month, Mr. June! He is also known as Matt Bischoff or THE BEARD! He resides in Cincinnati, Ohio with his wife Tessa of 13 years and their two sons. They are all great supporters of the beard and his wife started The Whiskerinas, for all of us women who love facial hair! Matt has been involved in BMX since he was 9 years old and in 2005 started a bike company called Failure Bikes.

Aside from just that he also manages the Snafu BMX brand now. He and his beard ride as much as they can, especially when he is at home because he has a backyard full of jumps! Matt explains that being a dad is the most bad ass thing that he does though. His two sons ages 4 and 6 are his best friends. The Beard is the singer in the band Moonbow and has a debut record coming out this July! Check out a video of the band at the end of his interview! He enjoys good music, people, beers! Amen! Matt says, "Life is short. Kick Ass!" 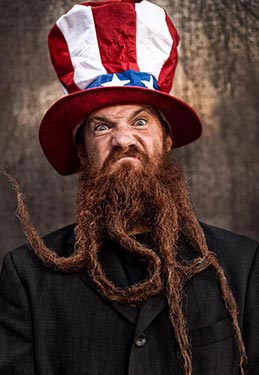 Name: Matt Bischoff aka The Beard

You have become a celebrity in the bearding world, but now you have just finished up a season as a reality TV star on Survivor, what was the best part of that experience?: Thanks for the props. Being on Survivor was one of the most amazing experiences of my life. It was the hardest thing that I have ever done, but the most ultimate thing ever. It was a dream come true. I applied in 2003 and no one ever called me. I thought too many people apply, so I did not apply again. But that is not how I live life. I go for it. So in 2011 I applied again and the rest is history. I learned a lot about myself and it changed my life forever. It was awesome because I got to show millions of viewers my beard! My beard dread got so awesome from not washing it and being in the saltwater. The only bad part was sea fleas getting in there and biting my face!!

How long have you been growing your beard?: I have grown beards ever since I could grow facial hair. I have had long goatees, full beards, you name it. I have grown out a natural full beard to terminal length around 3 different times in my life. My current beard I have been growing since like 2005. It grew to terminal length in about 3-4 years probably. I loved having a long natural full beard but I wanted something more. My goal is to grow a Megabeard. It is a lifelong commitment,
I started the dreadlocking process about a year and a half ago so I could achieve great length. It has gotten a lot thicker and mature over the last year. I am super stoked on it. There are times I wish I could still do Freestyle with my beard at competitions for the fun of it, but I never grew facial hair for competition. I am happy with my decision for Dreaded Megabeardness!

Why are you growing your beard?: I never liked shaving my face. It sucked. I have always pretty much had some sort of facial hair. The main reason that I wanted to grow something long was when I saw Layne Staley of Alice in Chains goatee. I wanted to grow one just like Layne, so I grew a long goatee. That led to getting tired of shaving the sides and that led to growing long beards. So I need to give some credit to Layne Staley for the inspiration! Now my goals are to reach the levels of the great Hans Langseth, Zachary Wilcox and Victor Preux!

Have you won or placed in any competitions?: Yes. I got 1st in Full Beard Freestyle at the Motor City Beard & Moustache Championships in April of 2011. I got 3rd place in Full Beard Freestyle at The Nationals in PA in October of 2011. (Check out Bro Council's video coverage of the 2011 Nationals here.) December 2011 I won best beard at The End of Prohibition party in Cincinnati. Since dreading the beard, I got 2nd place in dread category in Lexington in January of 2012, and I got 1st place in Cleveland last month in the best dreaded category.

How did you find out about the bearding community?: I stumbled upon the Beard Community in about 2003. I wanted to go to the events back then, but I didn't have the extra money. At that time, it was pretty much just the World Championships.There were no real beard events going on. I remember hitting up Phil Olsen back when he started Beard Team USA. Now there are events everywhere. It is insane! I think it's pretty cool. The more the merrier! I mean, the more the Hairier!

Do you belong to any beard club?: Yes, I belong to The Cincinnati Beard Barons and am a proud member of Beard Team Ohio. Shout out to Conor Moore and my fearless leader Thomas Maurice Smith Blurton!!

Is shaving anywhere in your future(I hope not!)?: The only thing that I will be shaving is my my arms, chest etc. I am not a big fan of body hair! But the Beard is here to stay!

What have you gained from the bearding community?: I have met so many good friends through the beard community. Traveling to beard events is awesome. So many great people involved. There is also some idiotic, arrogant people sometimes in the beard world that cracks me up. We have beards for cryin' out loud! My beard has become my trademark. Everyone in BMX knows me for my beard. I have gotten to travel and participate in some amazing events for charity. I have gotten to see my wife put together The Whiskerinas, which to me is one of my favorite things in bearding. The girls are at another level! I think having a beard made me stand out to get on Survivor. I also was a viking in an Airheads candy commercial and was on Miami Ink TV show because of my beard! I am very stoked on what my beard has gotten me into over the years. There is a lot more to come!

Are there any competitions that we can find you at in the near future?: There are so many events that I cant make it to all of them. I have gotten asked to judge a lot lately but my schedule hasn't really allowed a lot of those. I plan on going to Virginia in August. We shall see!

Congratulations to Matt, our June 2013 Beard Of The Month! If you are interested in throwing your own beard in the ring, contact us here. Check out Moonbow's video below! 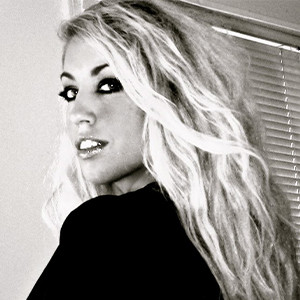 Jenny MarieClaire
Jenny is our resident beard enthusiast, and author of the popular Beard of the Month column.