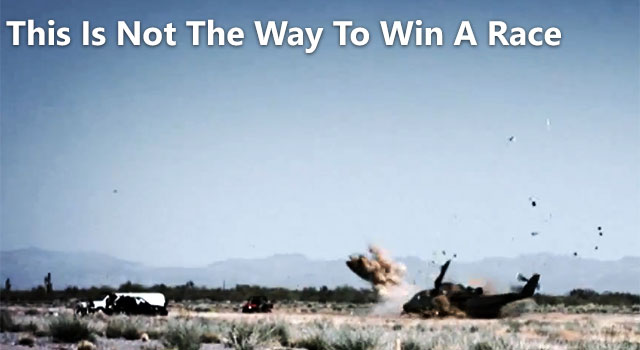 It's pretty well known that we are huge fans of the show Top Gear here at Bro Council. What we aren't typically fans of are the Top Gear branded shows from other countries, where the hosts are nearly as funny and they just run slight variations of the same gags and stunts. For instance, one popular bit on the show has a sports car racing a military attack helicopter, usually a Cobra or an Apache. Top Gear South Korea decided to try it out, and the stunt went as well as a missile test from their neighbors to the north - crash and burn.

The challenge pitted presenter Kim Jin Pyo in a Corvette ZR1 against an AH1 Cobra helicopter, and the Corvette killed it. Literally. The Cobra had a faulty flight control part known as a servo. This part controls the pitch mechanism of the rotor's control, which is why the helicopter made the turn the way you'll see in the video.

Thankfully no one was injured. Now can someone put together one of those infinite loop videos of the noise that Pyo makes at the 1:10 mark? Thanks.