In 2013, the fifth installment of the iconic Die Hard franchise was released and now, rumors of Die Hard 6 have been swirling. I haven't even seen A Good Day to Die Hard yet, but I'm sure I will eventually. It received a lot of lukewarm reviews. Most of the ones I've seen either hint strongly, or outright say, the series is headed for either a passing-of-the-torch from Bruce Willis to a younger actor (which could be why the new movie heavily involves John McClane's son), or an outright reboot, back to the very beginning. Due to several circumstances, a remake would be a truly awful idea. The current climate in the movie world, quality of acting, source material, and countless other things don't lend themselves to something of this scope.

In 1988, movies were not yet overrun with expensive technology, even more expensive actors, and style over substance. Director John McTiernan had just directed the hugely successful Predator. Willis wasn't yet the gigantic entertainment supernova he would soon become, but he didn't come out of nowhere. He had paid his dues for years in television roles, most famously opposite Cybill Shepherd in the hit Moonlighting beginning in 1985. Today, none of this would matter. Big money would be thrown around, in an attempt at making even bigger money.

One of the main reasons I love Die Hard is the sense of realism in it. McClane is a vulnerable man from the opening scene, which makes his heroism even easier to cheer for. I'm not a big fan of stupid, look-at-what-I-can-blow-up action films and never have been. The slew of imitators that soon followed overlooked the aspect of character depth in favor of the biggest explosions possible. This got old fast. Hollywood didn't notice, and kept trying to beat audiences over the head and tell them what to like. It would be even worse today.

The original story was adapted from a book, the 1979 best seller "Nothing Lasts Forever" by Roderick Thorp. Books used to be made of paper, and read and appreciated by opening them with your hands and turning the pages once you were done with one. Now they're downloaded and clicked incessantly. The remake would not be based on a book, it would be based on the original Die Hard script. Even if the studio had the slightly fresher idea of once again adapting "Nothing Lasts Forever" again, you can't be impartial about Die Hard. I refuse to believe anybody working in Hollywood, from script adapters to window washers, couldn't help but be influenced by it.

All that said, I have a terrible vision of how the remake would look compared to the original, adding so-called "modern touches". McClane would now be played by WWE's John Cena. The "average, but decently muscled" look of Willis is hopelessly outdated, and no decent focus group would ever believe he could be a hero. Cena doesn't have much acting skill from what I've seen, but substance takes a distant backseat to style these days. Speaking of distance, his children would be written out of this version. Guys as ripped and focused on being a completely indestructible cop like Cena don't have time for children.

Cena...sorry, "McClane", would be constantly stopping to wink at the camera every time somebody addressed him as "John", because breaking the fourth wall is always funny, every time, no matter how often you do it. We're going for the lowest common denominator here, and that's a great way to engage it. He would know his wife Holly (played by Katherine Heigl, because anybody that looks like a movie star would surely have a smoking hot wife) was no longer using his last name as her's, because he'd see it while looking down at his iPad, browsing Facebook, with close-up pans to each just to make sure everybody realized they should buy an iPad and sign up for a Facebook account.

The movie begins with McClane on a plane. Instead of looking tired and worried, his eyes are peeled, and he's lifting a dumbbell up and down waiting for the plane to land. "I love being a cop. Even when I've been on a plane for two days because I had business in Japan," he says, to himself. McClane yawns. A stewardess approaches. "Is there anything I could get you, sir? Hot towel? Some peanuts? Out of those pants?" McClane laughs. "Well, my wife did just say our relationship was 'complicated' on Facebook, so if you ask me, my life is pretty much...no-holds-barred." He winks at the stewardess and the scene fades out.

A new scene begins as the plane lands. McClane gets into a limo. The driver asks him where he's going and tries to make small-talk, including "That was a pretty long flight. Were you nervous?" which McClane shrugs off and says robotically "No. Nothing makes me nervous." The driver tires of trying to get anything resembling a human response from him, and starts to roll up the window between them. Just as it hits the ceiling, two masked terrorists appear out of nowhere, holding machine guns. McClane effortlessly grabs them both before they can manage to hurt him and throws them out of the limo. "Just like I do every January," McClane says with a wink, confusing most of the audience, who think the Royal Rumble is what happens in England when somebody tells Prince Charles how ugly his wife is.

The limo arrives at the building Holly works at. "Good luck." the driver tells McClane as he's about to exit the limo. "I don't need luck. I'm John McClane" he replies. The limo driver shrugs and drives off. McClane enters the building. He instinctively knows where to find Holly, because he's just that good of a policeman and husband. The couple argues briefly as more terrorists begin to funnel into the building. They are of course all radical Muslims, because nobody would buy German terrorists in this day and age. McClane clothesline one, and the terrorist falls into ten more. All eleven of them immediately explode.

McClane shrugs, wipes his brow, and grabs his shiny new iPhone from his pocket. He calls the police, but they won't listen to him. He uses the classic "What do you think, I'm ordering a pizza?" line from the original, adding that he just made eleven fall over like dominoes. "Did you say you want to order a pizza from Dominoes?" his phone asks. McClane says no. Five minutes later a pizza delivery from Dominoes arrives. McClane pretends to bond with the leader of the terrorists over the delicious Dominoes pizza (which the camera is sure to cut to as much as possible), then pulls out a gun and kills the leader, muttering "I was always more of a Pizza Hut guy myself. You know, like the Meat Lover's Supreme, the Stuffed Crust..." he goes on to list every possible combination of pizza that you can order from Pizza Hut. 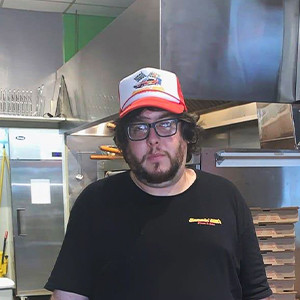