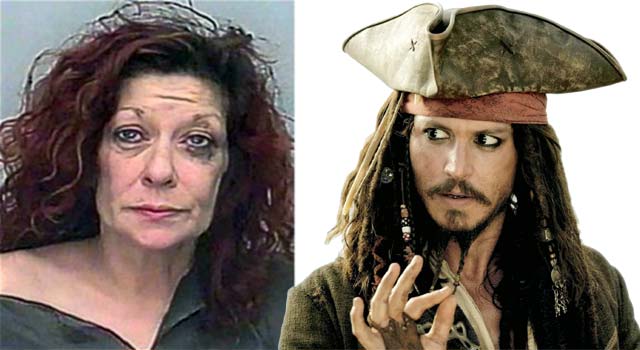 Pirates like Jack Sparrow are cool, and the Disney movie series Pirates of the Caribbean has been a huge hit. It's so popular, that people actually want to be like Johnny Depp's character. In fact, I have been told many times that I have his "who cares?" attitude. And, just this week I caught myself looking in my cupboards and saying "Where's the rum? Why is there no rum?" Well, a woman in Devon, England took it a bit further and has been sentenced to 112 days in jail because of her love of all things Sparrow.

Allison Whelan, a 51-year-old English woman, took a double-decker ferry boat for a joyride and smashed into several other vehicles, while shouting, "I'm Jack Sparrow!" and "I'm a pirate!". She had been drinking something called Lambrini, which is an alcoholic drink made from pears, all night-plus she was eating hallucinogenic plants.

While she was on her joyride, she yealled to the cops saying "what are you going to do now?" and "I'm a bit out of your jurisdiction." She was caught after about an hour, but claimed that she could have made it to St. Tropez if they didn't arrest her.

In breaking news, we have an unsubstantiated report that once she was handcuffed she collapsed faster the the Pittsburgh Pirates this season.

(As a life long Pirate fan that joke hurt, but no more then the last 20 years.)