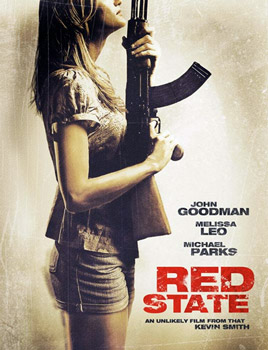 Today we have our first ever BroCouncil.com movie review; not just any movie, but Kevin Smiths new movie. Yes, that Kevin Smith and no it's not another Jay and Silent Bob (I wish). Don’t worry, I don’t plan on making any Jersey Girl jokes since he does that himself. This is a horror movie that if you didn’t know who wrote and directed it, you would do a double take and say WHAT?

For Smith fans we have heard for quite some time now about Red State but not a lot of actual information about it. That is, until Kevin started doing select city screenings before its actual release. I myself got to rent it on Apple TV from the comfort of my own home last night. On iTunes it was $9.99 and well worth the money.

Mr. Smith has become known for his "colorful language-straight shooting-never back away from what he actually thinks-doesn’t seem to feel the need to sugar coat anything" way of thinking. If you don’t like it, then that’s your problem. Which, for anyone who knows me, is probably why I’m such a big fan. (Editor's Note: Pat's views are his own - if you're offended by anything he says you can contact him @brocouncilpat on Twitter)

The movie centers around three high school boys in small town Middle America where there is nothing to do, and they find an online site for adult encounters. In a near by town there is a small family / church of protesting radicals armed for the rapture. Think Branch Davidians meets Westboro Baptist. These two worlds collide and we see what has become an overview from society of how we view our government’s involvement in such things.

Personally, I see it as finally someone in Hollywood is speaking out against groups like the Inbred Freaks at Westboro Baptist. I know we don’t get political here at Bro Council, but the small town in the mid-west I grew up in takes things very seriously, especially when we lose native sons in wars overseas protecting our rights and they threaten to come protest. It's refreshing to see someone with a big enough voice to say “This is how I see it going down, and what I would like to see happen!”  Of course, I am just speculating and babbling. I have not had the privilege to hear Mr. Smith’s views on his thought of the writing process - although I would love too.

Enough soapbox, and back to why we are here. The movie stars Michael Parks, Oscar Winner Melissa Leo, and John Goodman, who shows he is much, much more then Dan Conner or King Ralph. This was the best performance I have seen from him. Also with smaller roles was Kevin Alejandro, who True blood fans will know as Jesus, and finally one of my all time favorites - Kevin Pollack.

You can pre-order the DVD and Blu-Ray with loads of extra items as usual with one of Kevin’s movies. But from what I could see their is no release date as of yet. I for one will be placing my Blu-Ray pre-order next payday or whenever Ray decides to pay us again.