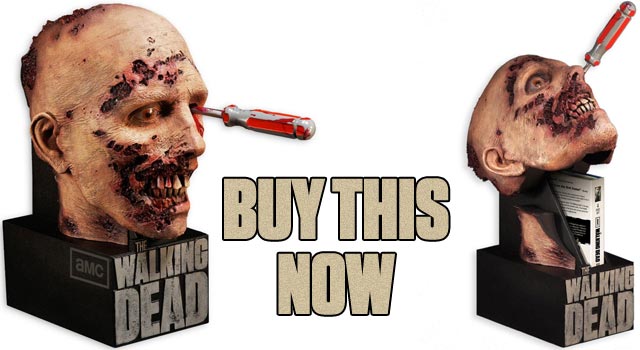 Walking Dead Season 3 is coming upon us soon. What better way to celebrate than by picking up the Season 2 Blu-Ray and re-watching it? Oh yeah...there is a better way. You can pick up the deluxe edition and watch it with your very own zombie head.

Anchor Bay Home Entertainment is releasing Season 2 on August 28, and they went all out. The limited edition zombie head cases were designed by McFarlane Toys, the toy makers of choice for all serious comic book fans.

Season 2 picks up right after the first seasons finale, and find Rick Grimes - the valiant former police officer - leading a group of survivors through the zombie apocalypse. If you haven't seen the series, start now. It's awesome.

The Blu-Ray set will have the following features:

The Walking Dead: The Complete Second Season will be released on August 28th. Check out the trailer below, and go! Order the Blu Ray Set Here.