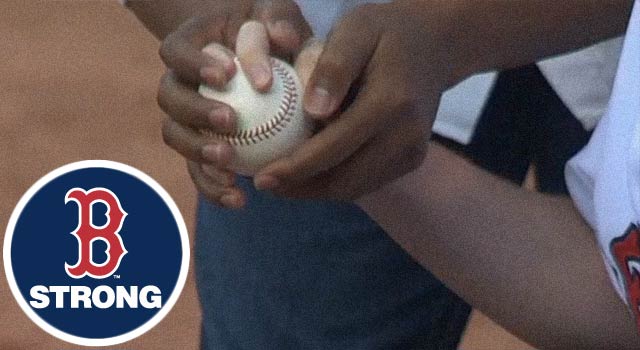 Jeff Bauman and Carlos Arredondo took to the mound last night to throw out the first-pitches of the Red Sox - Phillies game. The two aren't minor league pitchers who got called up to "the bigs" for their first start, they're both heroes.

And yes, we know the term "hero" gets thrown around a lot these days, but in this case it's justified.

Bauman is the man who looked directly at Tamerlan Tsarnaev a few minutes before he and his brother detonated two bombs that caused him to lose both of his legs below the knee. Even so, while he was recovering in the hospital, the first thing he did when he regained consciousness was ask for a pad of paper and a pencil. He couldn't speak yet, but he battled through the pain and give a description of who he thought the bomber was. That picture turned out to be an integral part of the search.

Arredondo is a 52-year-old activist who jumped into action as soon as the bombs went off. He saw that Bauman was on fire, so he put it out with his bare hands and then helped stabilize him as he was rushed to the hospital. Without these two brave men, there could have been more attacks, and without Arredondo there would have been at least one more death.

The great part of the pitches is that they were both MLB quality throws. Well done, guys.