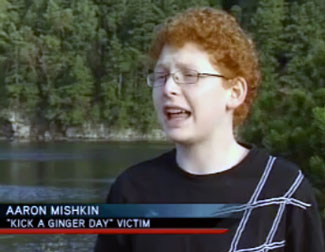 Here at Bro Council we like to bring you late-breaking news. Well, today we failed. Apparently way back in 2008 something big happened and we were not yet launched. So we missed this gem of a headline: "'Kick a ginger' day left redheads with legs covered in bruises".

We can't just leave this amazing headline alone. So first, here is a quote from Aaron Mishkin about that fateful day on November 20, 2008:

I left the class, and we have seven minutes to get to the next class, and I was amazed by the amount of people that kicked me along the way,” said Mishkin.

Over the course of the day, Mishkin figures he was kicked or hit about 80 times, all because of a Facebook group, apparently inspired by an episode of the satirical cartoon South Park that urged members to “kick a ginger” on Nov. 20.

Wow. I actually feel bad for the kid, my roommate has red hair and our very own Kristin does as well. So, I decided to start something brand new that had already been started. We're going to celebrate something different next Monday, January 30, 2012. We like to call it "Bro Council Kiss A Ginger Day".

Now, I did about two minutes of in-depth research and found out that people have already been doing this for a few years. At first I thought that was disappointing, but then I realized that it was as fake of a holiday as "National Teddy Bear Day", "Boxing Day", and "Valentine's Day". So what if there's two of them, or even more. We actually encourage you to start your own "Kiss A Ginger Day" or whatever other adjective you want to fit into that sentence. Competition makes everyone better. Our day though is next Monday, and we hope you partake by finding a ginger you like and planting a kiss on them. Here's a handy chart to help you with which "gingers" are Bro Council, Approved.

So in summary, January 30, 2012 - "Bro Council Kiss A Ginger Day". You can kiss Kristin, Amy Adams, Kate Mara, Isla Fisher, and pretty much any other red-head you want to. Just not Carrot Top.