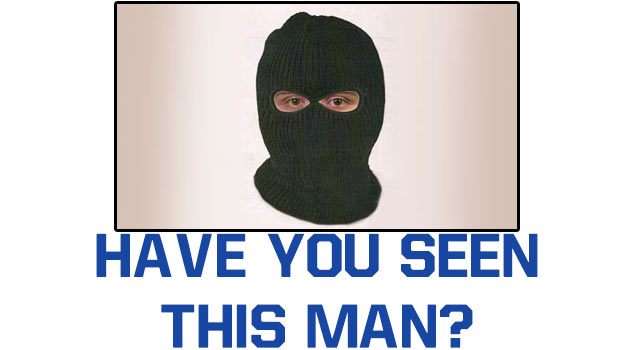 Oh Poland, the land of pierogies and where Greek economists look like Warren Buffet.

So you have probably seen news stories about a sketch artist drawing the accused suspect the police need help finding. Well as bad as our mainstream media is at times, (I'm looking at you CNN and Fox News) this media release takes the cake. I understand that not every police force has the arrest record of Horatio Kane's in CSI Miami, but this isn't even Arnold Schwarzenegger's Kindergarten Cop.

You see, the Polish Police force needs your help finding the masked man in the picture above. He is a suspected bank robber, and you should be able to spot him by looking for a man with a black ski mask on. Yes, that's the actual police sketch - a pair of eyes surrounded by a black ski mask.

Seriously? I'm thankful for the citizens of Poland that this didn't happen two months from now when everyone will be wearing ski masks there. They never would have found the guy.

The police spokesman Tomasz Stawarski said "The robber kept his mask on the whole time, so all we had to go on was his eye color, " he continued, "We haven't excelled ourselves this time."

On top of the masked man debacle, the police accidentally released the name of the only witness after he offered to assist them if he remained anonymous.

There are unconfirmed reports that the police are calling in reserve officers to assist in the apprehension of this masked vigilante. At the time of their activation the reserve force was working at a local factory building screen doors for the Polish Navy's submarine force.