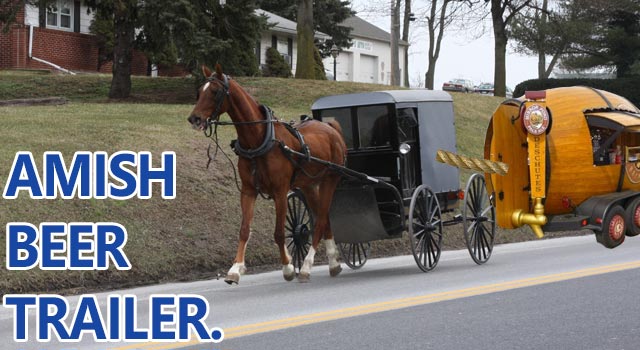 Ok I don't know what part of this is funnier, the Amish drinking party or the final sentence...Amish buggies fleeing the scene! All I can picture is Randy Quaid in Kingpin.

Here's the article from WHPTV.com:

Authorities in western New York say they've charged four young Amish adults with illegal possession of alcohol after their buggy collided with a police car responding to a report of a drinking party under way.

The Chautauqua County Sheriff's Office tells media outlets that the crash occurred around 7:15 Sunday in the rural town of Sherman, near the Pennsylvania border in New York's southwest corner.

Officials say deputies were responding to reports that people were drinking in several Amish buggies on a country road.

As a patrol car arrived on the scene, one of the Amish buggies changed lanes, colliding with the police vehicle. The buggy flipped onto its side, causing minor injuries to one of the people on board.

Wow. The Amish are awesome.