The Mythbusters Cannonball A House 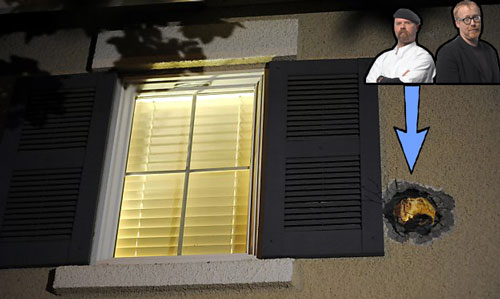 The Alameda County Sheriff's Department bomb range is a fun place if you're a Mythbuster or a fan of the Discovery Channel show. It's the place where Jamie Hyneman and Adam Savage go to blow things up. Did you ever wonder how far away from civilization a place like that is? Well, apparently it's too close to be firing off some of their experiments.

A homemade cannonball was launched at tubs of water, missed, went through a cinder-block wall, bounced off a hillside, went another 700 yards, bounced through the front door of a house, went up the stairs, through a bedroom door, then another wall, crossed a six lane highway, hit a roof, and then landed on a Toyota minivan before it finally stopped.

"It's shocking - anything could have happened," said Jasbir Gill, the owner of the minivan, after it had been taken away as evidence, along with the cannonball.

Nelson said that Mythbusters had used the bomb range for over 50 episodes since the show premiered, and they have never had an incident. Apparently someone got in touch with Savage on the phon and his only response was "I can't talk right now." And then he hung up.

Did you ever wonder what the Mythbusters pay to rent the bomb range? Nothing. The spokesman said the bomb range gets occasional donations from the show and "exposure" from being on the air. What does a bomb range need exposure for? Hey, spokesman, we'll donate a crisp $20 bill and throw the video up on our site if you let Bro Council come blow some stuff up. Maybe we'll even hit some houses with cannonballs. Deal?