The Poor Man's Version of Batman 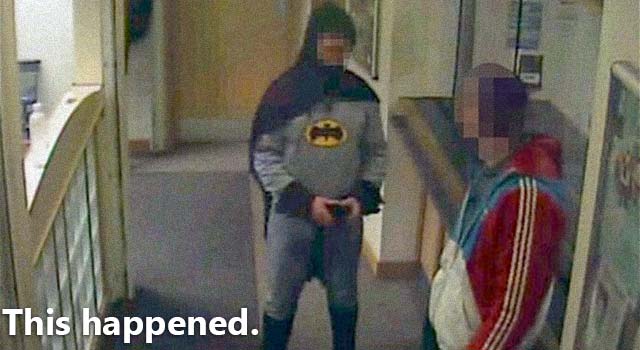 Remember in the second Batman movie, The Dark Knight, when Christian Bale's Batman had to rescue a crew of wanna-be superheroes dressed as him? They all had really bad costumes and sporting equipment right out of the Teenage Mutant Ninja Turtles Casey Jones playbook.

Well, that happened this week in Yorkshire, England where a real-life version of one of those wanna-be vigilante's showed up with a 27 year old fugitive who was wanted for fencing stolen goods. The poor man's version of Batman, dressed fully in a bad party shop version of the 60's and 70's Batman, mysteriously showed up at a local police station only to say "I caught this one for you."

I really hope he imitated the Adam West voice when dropping the crook off. While we think this is awesome, just know that it can be a very dangerous idea to try to take the law into your own hands. Leave that up to the superheroes in Hollywood folks. Unless you're this guy - then you just keep on rocking it.

Check out the news clip below.