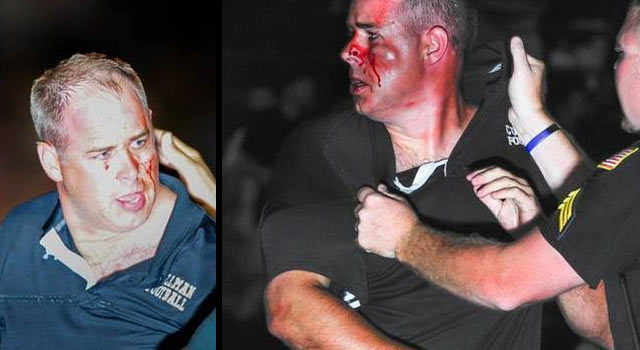 In what can only be called a great display of men influencing our youth, two high school football coaches in Alabama decided to skip the traditional post-game handshakes and move on to fists to the face.

The incident happened during a recent game between two towns slightly north of Birmingnam, Cullman and Walker. Cullman scored a touchdown with 18 seconds to play and won the game 13-10. Emotions were obviously high as the team's started to walk off the field, and the coaches couldn't control themselves. Punches were thrown, police were involved, and Walker coach John Holladay was rewarded with an "administrative leave" and then a suspension for the rest of the season by the Alabama High School Athletic Association.

Cullman's defensive coordinator Matt Hooper looked pretty beat up after the fight, and also received a suspension until the season is over.

The team's were battered too, as each school was fined $1,500 for the "flagrant unsportsmanlike conduct" of the coaches. And to top it off, Walker High School was already a recipient of a non-restrictive probation for another flagrant unsportsmanlike incident during last year's season. Because of that, Walker will be allowed to finish their 2013 regular season games, but are not allowed into the playoffs.

Walker High School released this statement after hearing about the AHSAA ruling:

We apologize for the behavior that was exhibited and pledge to emphasize and put into place the measures necessary to prevent this kind of behavior in the future by a Walker High School student, coach or teacher.

The first necessary measure should probably be to fire John "Doc" Holladay. Check out the disgrace to high school sports below.