Brett Hull Is The Man 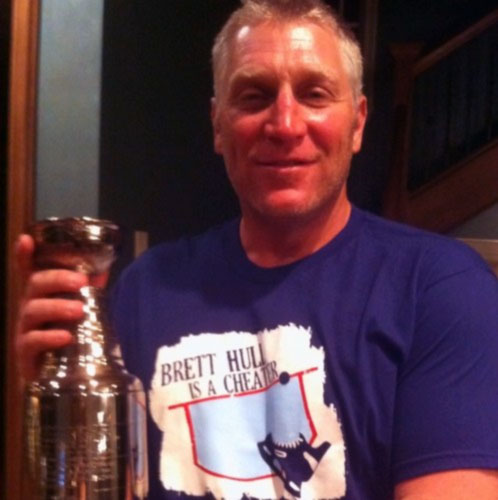 Alright, Brett Hull is now on my list of favorite hockey players. He was always a borderline favorite, but after he switched his Twitter image to the picture you see on the right, I'm sold. The caption to it said, "New pic for all my friends in buffalo xoxo." Amazing!

For those of you who don't know the back story or don't recognize hockey as a top sport, I'll sum it up. In Game 6 of 1999 Stanley Cup Final in triple overtime, Hull shot a puck on net at Dominik Hasek, the goalie for the Buffalo Sabres, and he made the save. There was a rebound that hit off of Hull's skate, and he kicked it towards his stick. His other skate was still in the blue area that surrounds the goalie (known as the crease), he shot the puck again and scored - winning the game for his team, the Dallas Stars. In Buffalo.

The one problem was that the NHL had been using a rule all season that said you couldn't score if a part of your body was in the crease before the puck was there. There were a lot of goals like the one he scored that were over-ruled in the regular season, but they let his goal count. There's still a lot of debate (mainly in Buffalo) as to whether or not this should have counted, but in fairness it was a dumb rule anyway.

People in Buffalo and some others have said it's a horrible call, and other say there were exceptions that allowed it to stand. Either way, it was controversial, Buffalo fans don't like Hull, and he's wearing that shirt in his Twitter picture. Awesome!

You can get the shirt at Born In Buffalo.