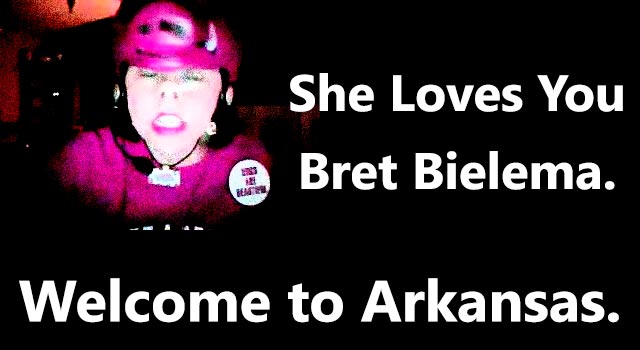 Remember earlier this football season when we brought you the crazy singing Arkansas Razorback fan with pig sooey songs? The woman was a loyal fan even though the team collapsed faster than a house of cards in a hurricane.

Well she is back and singing about the hiring of new head coach Bret Bielema from the Wisconsin Badgers. You know him right? He's the guy who earlier this year said "we aren't the SEC and we don't like anything about the SEC." He's also the guy who complained about Urban Myers' aggressive recruiting tactics that he used to win a National Championship with Florida....in the SEC. Oh! And he's the same guy who admitted to telling his defense to injure two different PSU QB's. Yeah that's the guy that she's excited for. Congrats, $outheastern Conference and crazy singing lady. He's all yours.

Check out the clip of "Bret Bielema I'm A Believer by lizhoney in the style of The Monkees Karaoke" (and yes, that's the title she gave it) below: