He Should Have Had Some Jerky Instead 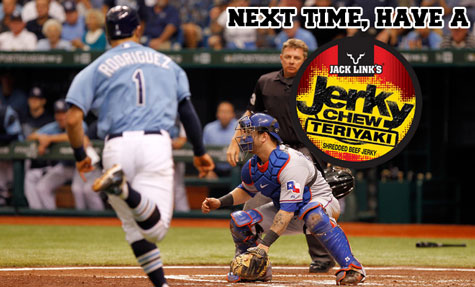 See that picture there? It was taken right before the collision at home plate from a long throw from the outfield. It was Game 4 of the American League Division Series, and one of the most exciting plays in baseball was about to happen. Mike Napoli of the Rangers gets the ball, goes for the tag, Sean Rodriguez of the Rays hits him at the plate, and Napoli swallows his chewing tobacco.

Sick. I'm surprised he didn't hurl on Rodriguez. After the hit, Napoli said "Geez, I had a wad of chew, where is it?" After his coach told him he swallowed it, Napoli responded with "I'm all right skip, let's go."

Apparently Rodriguez hit him in the the throat on the play, forcing the chew down. Both men said it was a clean play, and Napoli didn't miss a beat. All I'm saying is that I'd rather swallow shredded jerky than tobacco. Congratulations Mike Napoli on your stomach of steel.