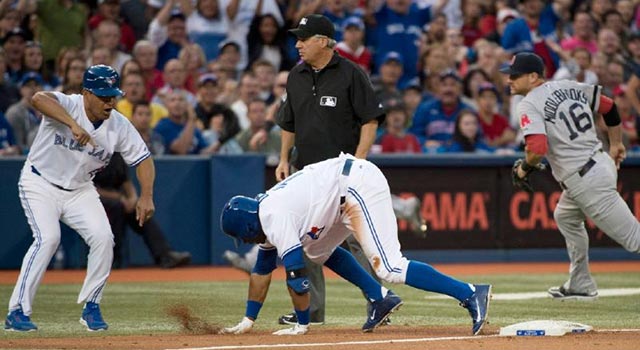 This week the Toronto Blue Jays played the Boston Red Sox. It was a pretty uneventful game other than one really fun sequence that happened after the Blue Jay's Rajai Davis hit a ground ball that went towards Red Sox pitcher Jon Lester. The ball hit Lester in the leg, and then the fun started.

After the ball hit Lester, he tried to throw to first but it went wide of the first baseman. Shane Victorino came in from right field to grab the stray ball and tried to throw Davis out a third, but that throw hit Davis and went off course as well. Davis then went home and claimed a Bad News Bears style inside-the-park home run.

(And yes, we know the two errors that were called on the play prevent it from being a "real" inside-the-park home run, but that doesn't affect how great it was to watch.)

Check out the video below to see the whole crazy series.