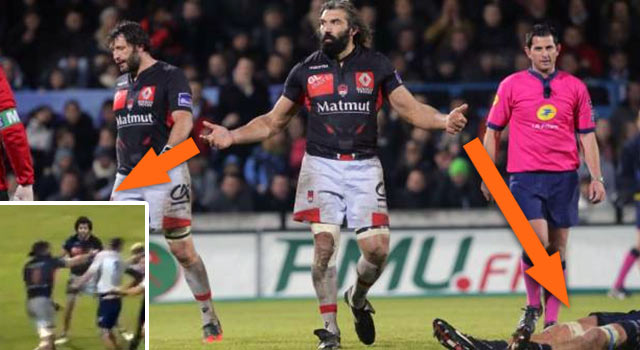 Today, we were sent a video by a reader and we learned two things:

'Caveman' Sebastien Chabal is a flanker/lock for the French rugby union team Lyon Olympique Universitaire (LOU) who gets his nickname because, well, he looks like a caveman. Oh, and because he's a beast on the field with his hard tackling and penchant for breaking people's jaws and knocking-out opposing players.

This weekend Lyon was going against SU Agen Lot-et-Garonne, and Chabal was apparently annoyed by Agen eighthman Marc Giraud holding him back on the field. So he did what felt good (for him) at the time: he hit him with a right hook and knocked him out cold.

Giraud was carried off on a stretcher, and the referee handed out a yellow card to Chabal. Yes, a yellow card; Chabal knocked a guy out cold with a roundhouse, and he had to stop playing for ten minutes.

Giraud tweeted later about the punch and said "It's not too bad, thanks for the support. I'll sleep well."

Yes you will, Giraud. And we'll be watching rugby on a regular basis now. Check out the hit in the video below, the action happens on the left side of the screen at the :30 second mark.