Should The Saints Forfeit Their Super Bowl? 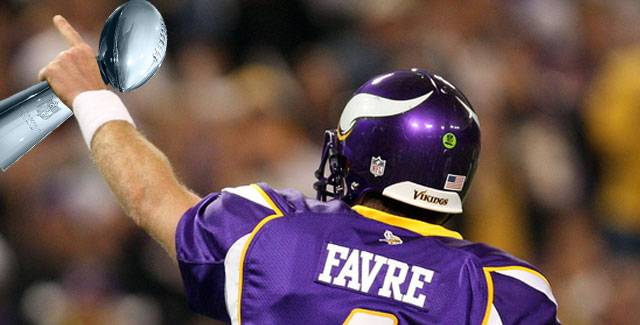 Could the picture above have been the one that led Brett Favre into his final retirement? With all the news about the New Orleans Saints bounty program, you have to wonder what would have happened had Brett Favre not been destroyed during the 2009 NFC Championship game against the Saints. I remember watching the game and cringing every time Favre and his 40 year old body get leveled on what seemed like every play. Now we know that Favre was the target of one of the Saints bounties, so does that mean the Saints should forfeit the game and, in turn, their Super Bowl XLIV Championship? Let's take a look at the options:

Option 1 - They Forfeit The Trophy

Although there has never been a Super Bowl Championship controversy like we've seen in the NCAA with USC's 2004 season and in MLB with the Black Sox scandal of 1919, an NFL coach was also never suspended for a year before this. It was a close game against the Minnesota Vikings, and a case could be made that without those injuries the Saints may have lost. Here are the problems with this outcome though:

Option 2 - An Asterisk Is Added To The Championship

The asterisk idea has always been a stupid idea to me. What good does it really do, and how do you actually enforce that the asterisk is placed next to every mention of the debated result? I don't think you can, and you should be all in or all out. We are becoming a wishy-washy society when we just want to please everyone and put the asterisk there. "Yes, you should have the trophy taken away, but we don't want to really offend your fan base and cause division, so here's a little mark reminding everyone about your poor choices." Lame.

Option 3 - The Saints Keep The Trophy, And History Puts An Asterisk On It

The option that will end up happening is that people will debate the validity of the championship for a while, and then people will forget about it over time. Nobody remembers second place, and everybody forgets scandal after it has been out of the papers for a while. Just look at Bill Clinton, Michael Phelps, and the Minnesota Vikings. Most people don't talk about Monica Lewinsky, forgot about Phelps (and Clinton) smoking marijuana, and I had to do a Google search to remember what the Vikings party boat scandal was all about. This will all go away when ESPN and the papers stop making it an issue. But....

The problem I see with all of this is that, no matter the outcome, the Saints are no longer the feel good story that they were. Between Sean Payton's Vicodin scandal, the Drew Brees contract saga, and now this, the team has taken a hit. After Hurricane Katrina, the Saints were riding high. They brought hope to a city and a nation, and restored their fan's faith in a franchise that had floundered for so long. And now there will always be an asterisk surrounding those good feelings, not one placed there by the NFL, but by history. That's a sad thing to see.