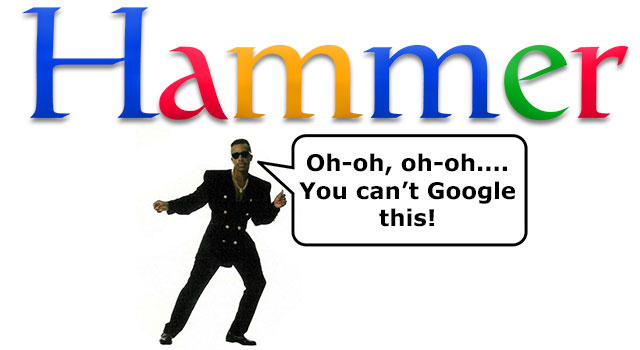 I did not expect to see this headline today: "MC Hammer is Starting a Search Engine"

Let that sink in for a second. Wait for it....wait....ok. Now we can continue with the article.

The rapper, who battled it out in the early 1990's with Vanilla Ice for the least hardcore rapper Grammy award is beta testing a new search engine that he hopes will overtake Google and Bing for the top spots in search traffic. Hammer was at the Web 2.0 summit in San Francisco on Wednesday and announced his new venture.

The new engine will be called "WireDoo", and Hammer has been working on it for two years now. So is Hammer a web designer, rapper, or commercial pitchman? I'm so confused. I do know he's ambitious. When asked what would make his search engine better than Google and Bing he said it will be its "deep search" capability. "It's about relationships beyond just the keywords," said Hammer, but he didn't explain what that actually meant. The tagline will be:  "Search once and see what's related."

There is a link available to get in on the beta testing if you're interested. Just click here and be Hammer-fied: WireDoo Beta

Things To Think About: