MIT Has Robotic Cheetahs? The End Is Near. 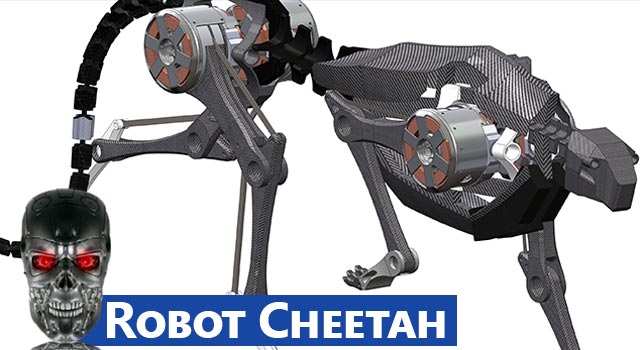 MIT is developing robotic cheetah's for DARPA's Maximum Mobility and Manipulation Program. The beginning of Skynet has officially arrived.

A team at MIT has been developing a robotic cheetah that can now reach a top speed of 13.7 mph. They were able to acheive such a high speed by replacing industry standard pneumatics with a "three phase permanent magnet synchronous motor". It also helps with efficiency, as the cheetah has a "cost of transport" (which is power consumption, divided by weight, times velocity) of around 0.52. To put that in perspective, the Asimo robot from Honda comes in with a Cost of Transport (COT) of 2.

You know what else it has? Kevlar tendons. Yes, this cheetah is bulletproof.

Check out the beginning of the end for humans in the video below, and picture that cheetah running with laser beams in it's eyes and a missile launcher on it's back.