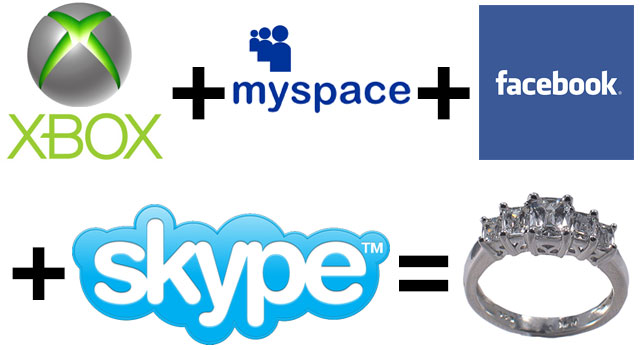 Have you ever thought that the person playing Halo against you was a good looking woman and that you would want to marry her someday? I haven't, since most of the people I get stuck playing Halo against seem to be angry, angry men or 15 year old kids who like to scream into the microphone.

Luckily for this guy, that wasn't the case. He met YouTube user "cadynow" five years ago in a Halo 3 game lobby and became friends with her for several years online. She was living in Texas and he was in Tennessee, which isn't a huge distance, but apparently they decided that the courting process would be done with MySpace, Facebook, and Skype instead of a bus or plane ticket. You know, the old-fashioned way.

But finally, after five years of online dating the couple decided to meet. The video below captures that fateful moment. Since then, they have met two other times in person and decided to get married.

Three dates and an engagement? This dude just saved himself a bunch of money on the whole process of marriage. Here's to hoping that he bought her a ring for her Xbox avatar instead of a real one...I think that would be a world record for cheapest engagement.