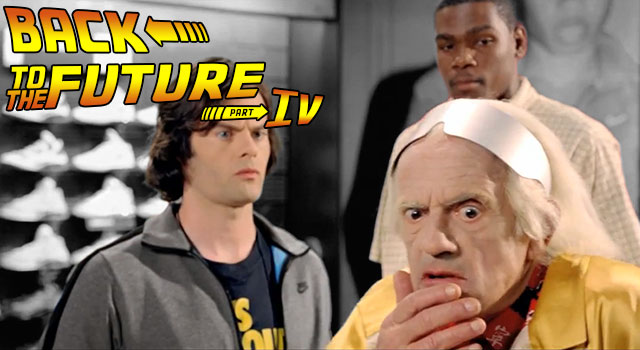 A few years ago, we told you about the release of the Nike shoe that Marty McFly wore in Back To The Future: Part Two. Officially, they are known as the 2011 Nike Mags, but we like to call them the McFly's.

The shoes were a limited edition of 1,500 pairs that were auctioned off on eBay with the proceeds going to The Michael J. Fox Foundation for Parkinson's disease research. Initially, the shoes started off around $10,000 per pair, but the winning bids went as high as $90,002. Normally, we would be upset that these shoes weren't made for the mass market, but donating the money to the Michael J. Fox Foundation more than made up for the fact that we weren't able to land a pair.

One thing we overlooked in our coverage of the shoe, was the accompanying video starring Bill Hader, Christopher Lloyd, Tinker Hatfield, Donald Fullilove, and Kevin Durant. And even though we're late to the game, we had to share it with you.

In the video, it was an ordinary evening at Lone Pine Mall and Kevin Durant just wanted a new pair of shoes. Then Doc Brown and the space-time continuum showed up. The only thing missing is a hoverboard.

Check out the video below for some retro BTTF fun.