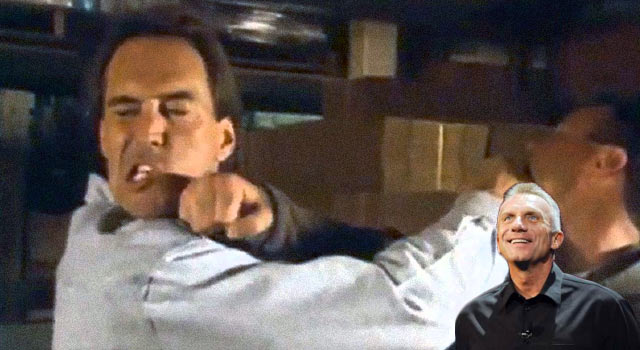 Have you ever seen the 1994 cinema-classic Kindergarten Ninja? Surprisingly, we never saw this surefire Oscar contender of a movie, but we love the 8-Bit soundtrack and the fact that it includes one of the worst fight scenes we've ever seen.

All joking aside, some films just should not have been made. To be specific, anything with Brooke Hogan or this monstrosity. It seems that it was so low budget tjat they didn't even have a special-effects team that could do a slow motion effect the right way by, you know, just slowing down the film. No, instead of that difficult task they decided to save some time and let the actors act it out.

Yes, that is Dwight Clark fighting as "Blade Steel." And yes, that's the same Dwight Clark of the San Francisco 49ers who is famous for "The Catch" in the 1982 NFC Championship Game which sent them to their first Super Bowl.

Joe Montana must be so proud.