R.E.M. Announces Breakup; The World Thought They Already Did

In other news; Elvis annou 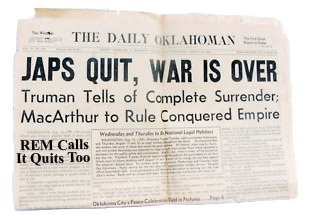 nces that he's dead, and newspapers around the world are announcing that the Japanese have surrendered and World War II is over.

So I looked it up and they apparently have released 4 albums in the past 10 years, and in 2007 they were inducted into the Rock and Roll Hall of Fame. Not too bad for an irrelevant band!

Way to last way past your prime R.E.M. - at least Brett Favre almost made it to the Super Bowl in his next to last year.