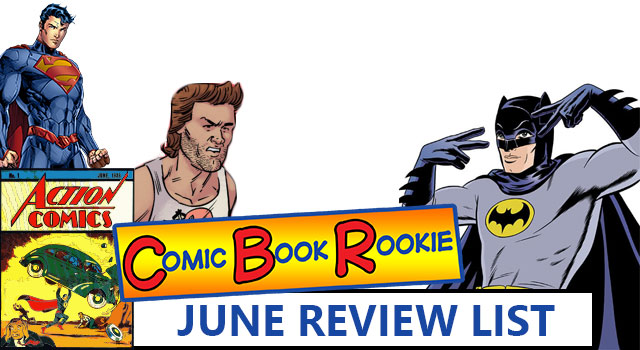 It's time once again for this month's Comic Book Rookie! The month of June flew by, and we had a tough time deciding what to highlight in the world of comics. There were so many good books this month, but these are the three that stood out above all others. So let's get started with the reviews, alright?

Yes, June brought us the long awaited new DC super-team of writer Geoff Johns and artist John Romita Jr, Romita was a long-time Marvel artist, and it was announced a few months ago that he and Johns would be the new team taking over Superman. If you have not picked up this title yet, now is the time! This is the perfect jumping-on point, as they introduce the first of many new characters and mysteries. The first is Ulysses, the Man of Tomorrow, who seems to have a lot of the life experiences that Kal’el does. The art is another great part of the issue, and is nothing like we have seen in the DC world before - it is truly amazing. This title along with Batman (who just started the final act of the year-long Zero Year story arc) give DC an amazing one-two punch for the sales sheets each month.

The Rookie's Verdict: Pick this up yesterday. Amazing.

John Carpenter's 1986 fantasy Kung Fu movie “Big Trouble in Little China” was a flop at the box office, but grew a cult-like following over the years with video rentals and television. If you have seen the movie, and enjoyed it like so many of us, you will love this ride on the Pork Chop Express with Jack Burton, Egg, and the rest of the crew. This book really nails Jack's sense of humor and personality, so much that you can picture and hear Kurt Russell while reading Jack's parts. The way they start out the issue is awesome as well; if you remember, the movie ends with Jack rambling over his CB in the truck while a mythical creature hitches a ride - and that is EXACTLY where they pick up the first pages here. If you love the movie, then this is a must add to your pull list.

The Rookie's Verdict: A fun read for non-fans of the movie, a must-pull for fans of the original film (or cult movies in general).

Finally, this month we bring you a new mini-series that has been much talked about for the last few months. The series is a partnership since it features DC's Batman, and Dynamite's Green Hornet. The two publishers have joined forces with two of the biggest comic book fans around to write the book; writer and director Kevin Smith and radio host and actor Ralph Garman. They say you always remember your first Batman caricature, and that for me was the same as these two - the 1960's Adam West version.

The TV show, although very campy, saved the character since DC was considering cancelling the comic at that time. Since then, the 60's Batman has gone on to become (arguably) the most loved of all the versions. This comic series pays homage to the crossover the two shows did back in the spring of 1967. It seems only natural that Garman, who has one of the biggest and most prized 1960's Batman collections and was a driving force behind Adam West getting his Hollywood Walk of Fame star, would write the series. During a recent podcast. Kevin Smith described that process; Garman wrote the story, while Kevin (the seasoned comic book writer) only had to clean up some very little pieces of the story. This book was a lot of fun, and even more fun is the fact that the two did a reading of issue #1 for Kevins “Fatman on Batman“ podcast. The podcast was, fittingly enough, Episode #66.

The Rookie's Verdict: Buy this, then go buy the 1960's Batman movie on DVD.

That's it for June! Want more reviews? Feel free to check out our past issues here.