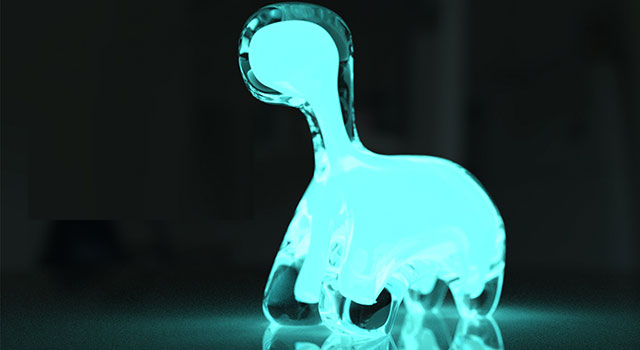 Do you remember Sea Monkeys? They were one of the most popular toys of all time, were advertised in the back of comic books, and promised that you could grow an entire "family" of them just by adding water.

In reality the sea creatures were brine shrimp, and the gimmick of the Sea Monkey was started by a guy named Harold von Braunhut who also invented X-Ray Spex. At first, the toy didn't sell well, but then von Braunhut decided to place those ads in comic books and he couldn't keep them in stock.

Now that comic books aren't on every child's wish list (even though they should be), what do you do to market your own aquatic toys/pets? You turn to Kickstarter. A company called Yonder Biology has created a new toy called the Dino Pet, and it has a few great things going for it. First, the algae contained in the casing glows, and second, the casing is shaped like a dinosaur.

The "creatures" inside the casing are known as dinoflagellates, which are basically algae that glow when agitated. You keep them exposed to indirect sunlight during the day, and give them a slight shake at night and they'll glow. The Kickstarter creators of the Dino Pet will provide you with the algae, the dinosaur shaped case, and the food you need to keep them living for a $40 pledge. They'll start shipping in February, and you can check out a video of them below.

And yes, we did actually order one for the office. February can't come soon enough.