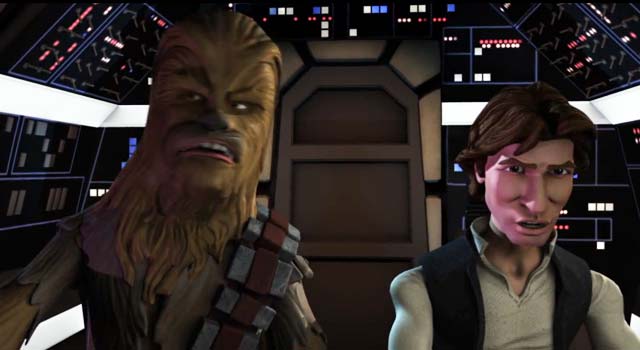 The Digital Animation and Visual Effects (DAVE) School is a computer modeling school based out of Florida. And apparently, some of their students are Star Wars fans. Because of their enthusiasm for the World of Lucas Disney, we now get to see why Jabba the Hut placed a bounty on Han Solo's head for the first time.

The winner of the prize for Best Animated fan film at Star Wars Celebration V and was presented in 3D during the convention. "The Solo Adventures" tells the tale of how Han Solo dropped his cargo at the first sign of an Imperial Cruiser. But of course there is a lot more to the story! This film was a class project by students at the DAVE School of digital Arts and Visual Effects in Orlando Fla.

Harrison Ford is everywhere these days. Check out the video below, and make sure you watch close for the surprise cameo at the end.