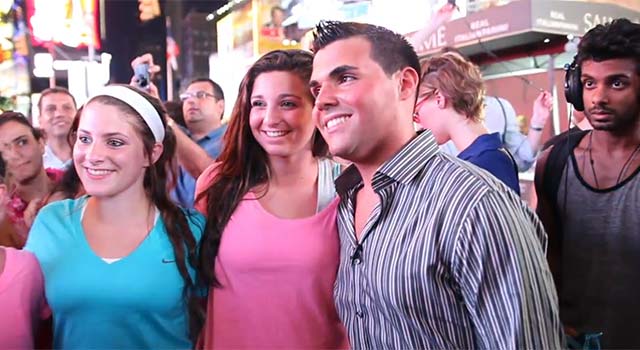 This summer, a guy named Brett Cohen decided to become a celebrity. His goal was to trick the people walking through Times Square in New York City into thinking that he was a celebrity.

Brett dressed up in something he though celebrities would wear, hired two professional bodyguards, two people to play his assistants, and a couple people pretending to be paparazzi. The "assistants" and photographers waited outside of NBC Studios and started talking about the "big star" that was walking out soon. If anyone asked who the star was, the crew wouldn't answer.

As Brett and his fake entourage walked down the streets of New York City the crowds grew every step of the way and he took pictures with over 300 people. Most people didn't even ask who he was, but in interviews after taking pictures with him they tried to talk about how much the liked him from his "music" and "film" roles. The most popular idea about who he was? A few people thought he was in Spiderman.

This shows you how we view "celebrities" today. Reality TV has blurred the line between who is famous for doing something productive, and who is famous for being a teen mom who lives on the Jersey Shore with big brother watching them be survivors. Now, everyone can be a star, and Brett Cohen showed it. Check out the video below.