Russian Bus Driver Rams Cars That Cut Him Off 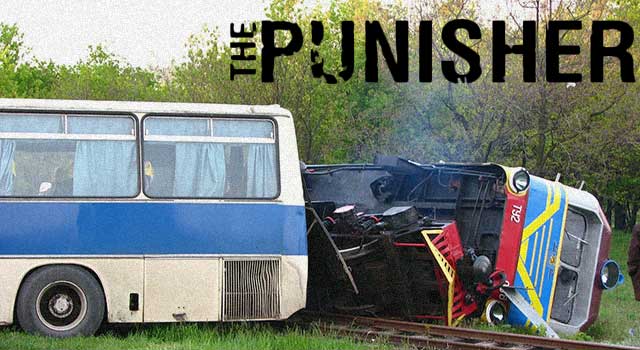 A Russian bus driver has been nicknamed 'The Punisher' since he has decided to start deliberately ramming cars that cut him off. Then he posts the footage online for the world to see. Based off of that one sentence, this story is already awesome.

Alexei Volkov works near Moscow in Zelenograd, Russia and by his own admission has already has had more than one hundred traffic accidents. And to top it off, he has managed to keep his job despite the fact that he is unapologetic about his driving. Here's a quote from Volkov:

If there is no fault of mine, the management doesn't care. The bus usually gets only minor damage. If the damage is more serious, they just wait for the insurance payments and then repair it.

For example, in the last accident the front bumper was seriously deformed after I hit a truck weighing three tons.

What could I do? Swerve to the left in the oncoming traffic or suddenly brake and maybe injure the passengers?

In both cases my licence would be revoked and I'd have some serious problems. While the happy b****** would just leave the scene. I am not interested in such an outcome. The cops just grin.

Volkov started recording the crashes in 2007 to defend himself from insurance scam drivers who cut in front of other vehicles on purpose in order to make fraudulent claims. Although, I'm not sure that recording yourself ramming into other cars is a good defense unless you're Lindsay Lohan.

I agree with Volkov 100% on this next point: he says that his driving style helps to 'educate' drivers in Russia. "They usually behave in a rude manner. I often see how bus waits with the turn signal switched on for one - two minutes, and these morons still continue squeezing in. However, the situation is gradually improving. Also, it's partly due to my educational work.

Nice work Volkov. Thanks for keeping the streets of Russia safe.

Check out the video of some of his best wrecks below.