5 Reasons Being Rick DiPietro Is Awesome 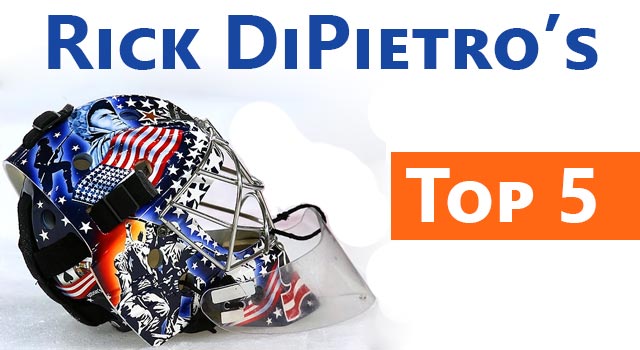 Recently, Yahoo! Sports Puck Daddy featured our Rick DiPietro Illustrated Injury Guide in an article, and we feel a little bad about that.

You see, we're not Rick DiPietro haters here, we just understand that humor can be found in almost anything. And at the same time, we realize that everyone goes through a lot in their life, and with the recent news that Rick DiPietro (DiPi) has been going through some pretty tough personal struggles on top of his hockey injury woes, we wanted to do another article on the Islanders goalie.

So without further ado, here are the top 5 reasons that being Rick DiPietro is awesome:

Now, if you're an Islanders fan or, then-Islanders GM, Garth Snow you probably think this is a horrible thing. But for the rest of the world, we understand that DiPi signed a contract that will pay him $.5 million for the next 8 years even if he continues to play in the AHL. How can you fault the guy for that? Sure, you can fault former Islanders GM Mike Milbury for first offering the contract in 2005, the aforementioned Snow for actually giving DiPi a second chance to sign it in 2006, or Islanders owner Charles Wang for signing off on it but not DiPietro.

The guy simply signed a great contract offer and is now reaping the benefits of a mis-managed and hockey illiterate Islanders team.

2 - He used to be able to make saves like this.

Sure, he's not as good of a goalie as he once was, but in his prime he was an agile and feared netminder. Check out this save against the Colorado Avalanche from 2004.

And to the New York Rangers fans calling him "overrated" in the comments, let us remind you that you have had Chris Drury, Scott Gomez, and the infamous Wade Redden on your team. In fact, we're hoping that we get to see a little Wade Redden vs. Rick DiPietro action this year in the AHL.

Unfortunately for the Rangers, Redden will be making $2 million more than DiPietro while playing in their minor league club.

Here at Bro Council, we love America. And Rick DiPietro is American.

We are tired of having the Canadians and Russians claim dominance in the best winter sport that exists. And don't get us started on "Finland" and "Sweden" - are those even real countries? Sure, the American squad didn't win a medal that year, but DiPi had a 2.28 GAA in the Winter Games, so he held up his end of the bargain. Scott Gomez? Zero goals in three games.

Yes, it's pretty similar to #3 but we're going a different route here. In a recent interview, DiPi had this to say about his personal struggles and how he copes with the stress:

I attribute that mostly to my wife. I've had a rough couple of years. There's been some really dark times, really tough times. If it wasn't for her I'm not sure what would have happened. She keeps me positive, she keeps me working hard and fighting and gives me the strength to battle through.

Hey, there's nothing better than feeling supported. And when you're in a relationship with a woman like that, you're a lucky man.