Cardinals RB Andre Ellington Gets His Dreadlocks Ripped Out 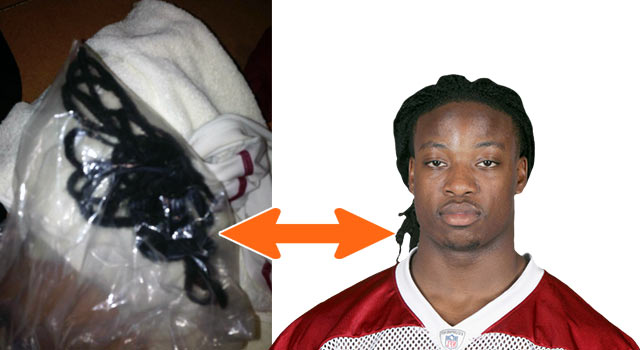 That lock of hair you see in the above picture? It was rooted in the head of Arizona Cardinals RB Andre Ellington for over 5 years until he suited up against the Jacksonville Jaguars on Sunday.

During a play where Ellington was stuffed at the line of scrimmage, part of his dreadlocks were ripped out while he was being tackled.

Ellington was asked about the pain that he felt from getting his hair ripped out, and he apparently didn't feel any. Ellington said "I just remember running the play" and said he "just couldn't do nothing about it."

Jaguars defensive end Jason Babin can be seen in the video below with a hand full of hair after the play. He proceeded to sprinkle it on the field like an at-sea burial, and didn't have any remorse after the game.

"Choices, decisions, consequences," said Babin when asked about the play. "When you play hard and fast, it's anything you can grab. I get pretty emotional and passionate out there. I get to be someone else for three hours."

A little fun fact for you: hair is considered part of the NFL uniform, so Babin was not penalized on the play.

Check out the video below to see the action for yourself.