Edmonton Oilers Use The "Flying V" 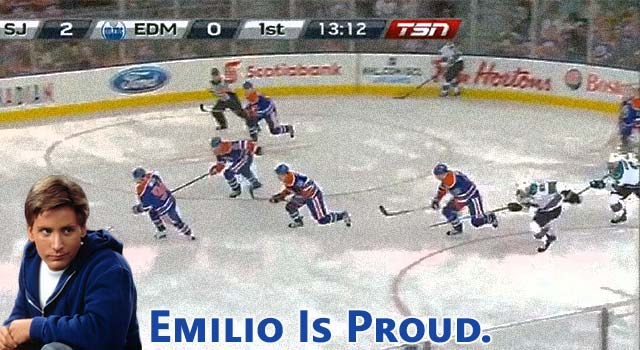 Last week, the Edmonton Oilers lost 6-3 to the San Jose Sharks. That's not big news, as even the Oilers don't think the Oilers are going to be any good this year.

You know what is huge news though? They used the "Flying V" of Emilio Estevez's The Mighty Ducks fame in the game. Early in the first period, Edmonton recovered the puck in their own end and began to breakout, and that's when the magic happened.

Unfortunately, the Oilers didn't score a goal, but in all fairness to Coach Estevez they did break formation too early. Here's to hoping that another team takes this move to the next level in a game this year.

Check out the Oilers video below as well as the original from The Mighty Ducks. And to this we say: Quack!