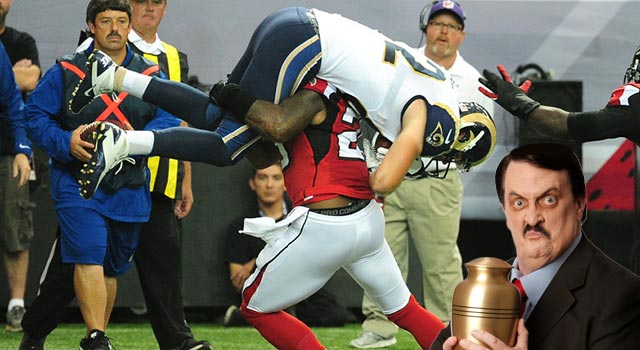 If an NFL player uses a WWE-style spinebuster in an NFL game, is that hit legal? Apparently, the answer is yes.

On Sunday afternoon, the St. Louis Rams took on the Atlanta Falcons, and Falcons safety William Moore brought the pain. As Rams tight end Mike McNeil was running toward the sidelines, he decided to try and jump over Moore. It turned out to be a bad idea as Moore snatched him out of mid-air and used a spinebuster to put him flat on his back.

If Moore would pull that off against Randy Orton, he'd be the new champion. Unfortunately for WWE fans, Moore is in the NFL for the foreseeable future so you'll have to wait a few years to see a John Cena-William Moore showdown.

Check out the hit below.