Tech Advice: How To Not Fix Your Cell Phone

My roommate has this phone...I have no idea what it's called, she calls it the Tamagotchi (who knew these still existed?). For the first six or so weeks we lived together I thought it was some sort of generic iPod I'd never heard of before. Anyway, recently Tamagotchi took a little swim in a puddle; and it got me thinking about all the times my Blackberry/Droids/Motorla Rzrs/Generic red phone I had in 11th grade have taken swims in puddles, bathtubs, pools, and one or two errant pitchers of beer. Every single time people always had great "quick fixes" for how to fix a cell phone. After years of experience, and trying to explain why my Blackberry Pearl smells like a frat house graduation party to the tech guy at Verizon, I still have absolutely no idea what does fix your cell phone from water damage, but  here is a list of things that most certainly don't fix it.

1. Rice. Now to be fair, I have heard that if you do it quickly enough and take your phone apart and put it into a bag of clean, dry rice it might actually help. What doesn't work is what we did; put my phone in one piece into a box of Chinese takeout and put it in the fridge. Turns out, Blackberry keys absorb teriyaki sauce really well, and it's both awkward and hard to explain when a technician takes the back off your phone and soy sauce pours all over the counter.

2. Putting it on the fridge. Someone told me once that if you put your phone on top of the fridge or a running dishwasher or clothes dryer, the vibrations can help shake out the water damage. This someone was also a guy who took seven and a half years to graduate from college with a degree in "leisure studies," so I have no idea why I thought this advice made sense. But it turns out if you do this, especially if you're only 5'3" like me and can't actually see the top of the fridge, you will most likely put your phone there, walk away, forget your phone is there, and get an email three days later from your friend wondering why they found your phone in a box of Chinese food on top of their fridge.

3. Put it outside.  At the time, this made sense. It was the middle of summer, it was about 90 degrees out and we were at an outdoor pool with a concrete deck. So logically, I figured if you take the phone apart, set it in the heat on the concrete, the water would evaporate out of it. No. This is not what happens. What happens is every piece of your phone heats up to a ridiculous level so fast that you end up having to douse it in water again just to make it bearable to touch it, and twice soaked is pretty permanent at that point.

As it turns out, one of the (unofficial) Bros at Popular Mechanics actually wrote an article about how to fix a wet cell phone, in case my terrible advice wasn't enough. 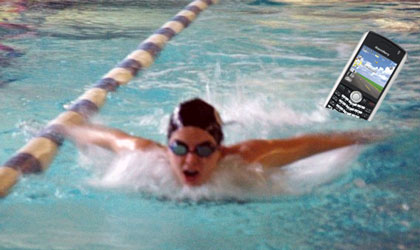