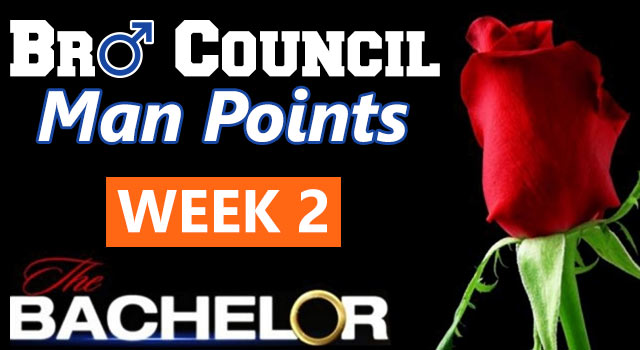 The continuing series commenting on ABC's The Bachelor from a man's point of view...

For you Bachelor noobs, the way that this show works is that each episode basically covers several days, and over that time the Bachelor has 3 dates and a cocktail party with the rose ceremony. Two of the dates are just one-on-one, and the other is a group of women and Sean. If a girl doesn't get a rose on a one-on-one, they go home. There's also one rose on the group date, and whoever gets that survives to the next week. The shows always end with a rose ceremony, where those girls not getting a rose go home.

The way this column is going to work is by weekly awarding/detracting man points to Sean for actions and moments on the show. Now, wise reader, you may be saying, "How do we properly judge Sean's manliness in the Bachelor realm?" That's easy: Brad Womack. Brad Womack, in my opinion, is the gold standard of Bachelor men to date. Consistently sincere, a two-time show lead, and a good source of introspection about man/woman relationships (his season sparked a fair amount of debate between my wife and me) puts him at the top of the list.

With 10 episodes on the season (8 remaining after this week), and Sean bringing in 4 points in last season's column with probably about 25-30 minutes of screen time, I'm thinking that a realistic point value for the "average" man on the show is about 80 or so. We're going to put Brad Womack at 100. Sean's performance last week was pretty muted, as it was more about us getting to know the women. However, he did have some strong moments: changing the rose distribution rules on the fly (+1), rock climbing for a cool down from another workout (+2), talking it out with a contestant from his season (+1), showing himself to be a family man (+1) and several flannel shirts (+1). Sean did wear a too-close-to-being-too-skinny tie for my liking (-1), and suffered from one-too-many shots of him gazing off into the distance (-1). Net episode score: +4.

In the opening shots from episode 2, Sean hits the pec deck followed by leg press. I'm guessing it was supersets, but the show doesn't confirm that. (+2). The first date goes to Sarah, which entailed picking her up in a helicopter (+1), then free falling off of a building (+1, even though a harness was worn). Sean mans up and listens to Sarah when she tells him a personally painful story and makes the girl feel special (+2).

The group date is a photoshoot with the ladies for the cover of a series of romance novels (on principle, -1), followed by a "pool party" which consisted more of one on one discussions inside because it was cold. He actually dressed business casual for this one, which was false advertising (-1 for that fact, +1 for the solid blazer). One girl (Katie) decided this wasn't for her and left. Sean was a gentleman and walked her out (+1). Sean gave the group date rose to Kacie B., a returning contestant who is working to get out of the "friend zone" with Sean, saying Katie's leaving showed how hard it is to date this way once, let alone twice. (+1) for the sympathy.

The final date was with Desiree (a fan favorite in our household), where Sean planned an elaborate prank to make her think she was somehow responsible for breaking an expensive, exclusive piece of art (-2). Last season, Sean tried a prank with Emily to make her believe he still lived at home in a messy room. I thought the idea was funny, but the execution was not strong. Sean responded by taking her back home and cooking her dinner (+3). Sometimes it's all about the recovery, gentlemen. I wish I could give Desiree points for being a good sport.

Sean sends a few girls home, including one from my hometown of Pittsburgh. Not a bad week, but Sean's got some work to do to take the Bachelor man crown.

Check Out The Previous Week Here: