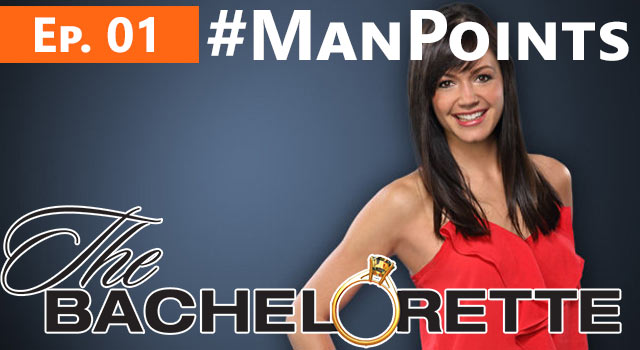 The continuing series commenting on ABC's The Bachelorette from a man's point of view. Our own Matt Truck (@BroTruck) watches the show with his wife and awards points based on many factors, all of which test whether or not the act on the show is "Bro Council, Approved." Each positive "manly" act gets a +, while points are deducted for things that aren't as flattering to your manhood. You can check out the ground rules here.

The Bachelorette returned into all of our lives last night, bringing #ManPoints right along with it. As noted last week, Desiree Hartsock began her quest at finding her better half with "America's 25 Most Eligible Bachelors". Sorting through one early stage relationship is difficult in and of itself, let alone 25. Don't worry, Des, we at Bro Council are here to help by helping you pick the manliest of the bunch. Who cares that the outcome is already known behind closed doors? Who needs semantics, anyway?

Panoramic clips and establishing shots of Malibu, California fill the screen. (The producers don't miss a beat. If there's a sweeping landscape shot in the first 10 seconds of the show, you know what show is on.) Des arrives at the Bachelorette mansion. Check that – the NEW Bachelorette mansion. Not surprising, after Sean Lowe wore out the gym facilities last season, the house's sweat equity was eligible for its own line of credit, allowing producers to get a second housing facility.

After some well-choreographed boardwalk roller-skating, bird chasing on the beach, impromptu playground sliding, and, of course, repeated gazing off into the distance (read: thinking), it's time for Des to meet the suitors. As an aside for the noobs, this works similarly to The Bachelor. Some of the gents get longer-form pieces, and our first interaction with others is their short walk from the limo to meet Des.

This first episode leaves us viewers barely scratching the surface in terms of level of knowledge of our ManPoints contestants. Accordingly, the traditional point awards will start next week. In the spirit of NHL playoff season, then, I'll use a modified "3 stars" recap. The 3 stars go to the guys who gave me the best manly moments, whereas the 3 flops go to the guys who better check if their man cards are still in their wallets.

Brandon – This cat describes himself as an "adrenaline junkie", with blatant disregard for the safety of his limbs evidenced by his wake-boarding prowess. When he rides up to meet Des, he shuns the traditional limo method of transportation and rides in on a nice motorcycle. I like this dude already. I'm not even man enough to hold a Harley Davidson brochure.

Zak W. – What's perfect attire for a formal cocktail party? Dress shoes? Check. Suit pants? Check. French cuff shirt? FALSE. Zak came shirtless, and his first question to Des was whether or not she'd "accept these abs". He followed this up with a solo cannonball without planning ahead for a towel to dry off or a change of pants. Des gave him the rose, pinning it to his belt. This was classic.

Will – The height of male expression is easily the high five. Nothing says "male bonding" like extended arms and open palms slapping together for no rhyme or reason. This isn't just for close friends, but also for complete strangers too. Will takes it upon himself to solicit skin from random passersby in downtown Chicago as he goes about his day. Epic.

Kasey - Brought the practice of hashtagging the happenings of the season vocally. I find that humorous. What I do not find humorous is stepping on my articles' turf. The well-placed hashtag was my jam last season. Men don't steal other men's thunder.

Larry – I give this guy credit. His entry point was trying to teach Des a ballroom dance move. Unfortunately, Des wasn't dressed for the event, and her formal gown snagged and got stuck on her heel. A guy has to know his surroundings. He took it like a champ though, and in his exit interview seemed to laugh it off by saying he'd tried the move 50 times, and only two had snagged their dress. Good recovery.

Robert – We at Bro Council cannot support standing on a street corner twirling a gigantic sign like a majorette. I'm all for hand/eye coordination, but not like this. Positively, he does enjoy outdoor sports.

Des sends home some of the suitors, including a Tailor/Magician (I was bummed...who doesn't love slight of hand?). A rough start for some of these guys, but we're off and running.

See you next week!