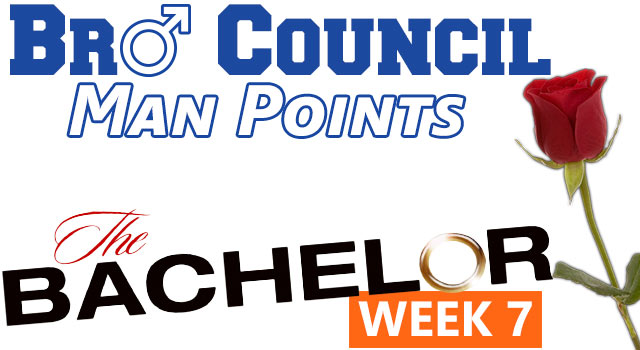 The continuing series commenting on ABC's The Bachelor from a man's point of view. Our own Matt Truck watches the show with his wife and awards points based on many factors, all of which test whether or not the act on the show is "Bro Council, Approved." Each positive "manly" act by Sean Lowe (@seanlowe09) gets a +1, while points are deducted for things that aren't as flattering to your manhood.

Hometowns were this week. The final four women get to have Sean in their home cities for a day and the infamous family meet-and-greets in the evenings. The women get to show Sean what makes them "them", Sean gets to see how he fits into these families, and viewers get to see the request of a daughter's hand in marriage to a father by a man he has known for the better part of two hours. Win-win-win.

As an aside, having done the "ask-for-the-hand" once myself, this is quite possibly one of the more nerve-wracking experiences of my life. You think you've got it together? Go try to explain that to a man twice your age with infinitely more life experience that has fathered his baby girl and not be nervous.

As an extension of the aside, fathers do not like to see their daughters sad or broken-hearted, let alone on national TV with a guy who has done a roundabout request for the girl's hand with all kinds of qualifying statements. In this episode, Sean laid it out there, basically saying "I don't know how this will shake out, but I'm asking nonetheless." No man points will be given for this, but at least he was honest.

The first hometown date is with AshLee in Houston. Sean gets out of the car wearing a jacket that appears to be a tribute to Top Gun (+1). When meeting the parents, Sean brings flowers for the mom (Nice touch, +1). AshLee's dad cries as he describes his love for his daughter. No points for Sean on that, but manly moment nonetheless.

Next, Sean jets off to Seattle, Catherine's hometown. One of the first activities is fish catching from a man slinging them rugby style (+1). Sean doesn't drop one, despite the fact that he's wearing a suit jacket (+2). In the time walking around the city, Catherine describes Sean's arms as "meaty" (+1 for the verbal reward on gym time), and later Sean breaks into folk dancing in the Chuck Taylors (+1).

Once at Catherine's home, we see Sean doing pushups with Catherine on his back to impress the family (no shame, +1). Coming from a guy who once made my pecs dance along as I sang a jingle to get a laugh, I give him kudos for the effort. Too bad it was followed up with a yellow flowered apron (-1).

Lindsay gets the next visit. Being an army girl, she lives on a military base in Fort Leonard Wood, Missouri. Throughout the visit, Sean shows genuine terror about meeting her father, an officer in the military (+1). He even goes so far as to ask Lindsay what he should call him (+1). Probably smart, given that the military man is capable of physical harm I wouldn't recover from. In the scenes after the show ends, Sean and Lindsay dine on a series of cupcakes. Men should never eat cupcakes. While they are delicious, peeling off the paper is far too dainty of a task (-1).

The final hometown goes to Desiree in Los Angeles. The date starts out with Des pranking Sean by pretending her ex-boyfriend was coming back to win her heart. Sean stands to defend her honor when she appears threatened (+1). A memo to the Bachelor producers – these scenes are far too awkward for viewer comfort. Sincerely, A Concerned Viewer.

The evening portion of the date goes a bit off of the cliff, as Des' brother attacks the show's process as being fake, Sean's integrity as being less than honorable. Sean vigorously defends his honor with words, and calmly steps away from the situation that could have gotten ugly (+1, because the concept of solving disagreements with fists seems less than gentlemanly).

Des gets sent home in the next rose ceremony, and the length of the departure scene makes me believe she may be a future Bachelorette.

Sean and the final three women are now off to Thailand. Pad thai, anyone?

(UPDATE: Week 8 is live. You can check out our recap here.)

Check Out The Previous Weeks Here: